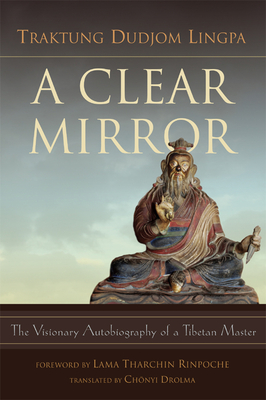 
Usually Arrives to Store in 1-5 Days
A Clear Mirror is the autobiographical account of a saint, a genius, a virtuoso who has granted readers what is most rare in personal accounts: full access to his incredible inner life. Dudjom Lingpa was a 19th century Tibetan visionary and Great Perfection master whose legacy of meditation teachings has swept across the world since his lifetime, due in part to the international presence of his re-incarnate successor, His Holiness Dudjom Rinpoche. Although the genre of biography is quite common in Tibetan Buddhism, this is unlike to anything yet translated into English.
This is exactly what Dudjom Lingpa does in his trilogy of auto-biographies. Although he was brilliantly successful in his multi-faceted career as a teacher to incalculable remarkable disciples, a prolific writer with at least twenty-one extant volumes of composition that are still studied around the world, and a Treasure revealer in the teaching system unique to tantric Buddhism, his stories offer us something else. In this book we are shown the very thing that high lamas regard as most sacred and intimate: spiritual evolution via the lens of inner-most visionary life, cinematic in scope, filled with fascinating beings, both divine and demonic. Dudjom Lingpa grants readers access to his enlightenment process--from learning how to meditate up to the highest tantric practices--as only he could have experienced it. This book, filled with vivid and fascinating visions and dreamscapes, is replete with adventure as well as everyday meditation advice. Anyone interested in a revolutionary outlook on personal transformation will enjoy and benefit from these stories.
Traktung Dudjom Lingpa's legacy remains widely influential, due in part to the international presence of his reincarnate successor, the modern master His Holiness Dudjom Rinpoche. Translator Chonyi Drolma, who studied translation under Dungse Thinley Norbu Rinpoche and Lama Tharchin Rinpoche, lives near Corralitos, CA. Lama Tharchin founded Pema Osel Ling, a Dudjom Lingpa-lineage Buddhist center near Santa Cruz, CA.

"Dudjom Lingpa’s autobiography is replete with epic visionary adventures, songs of realization, and everyday meditation advice that will inspire readers to consider enlightenment in a whole new light. Dudjom Lingpa grants readers access to his divine process—from learning how to meditate up to the highest tantric practices—as only he could have experienced it. Anyone interested in a revolutionary outlook on personal transformation will enjoy and benefit from these stories."
—Lama Tharchin Rinpoche