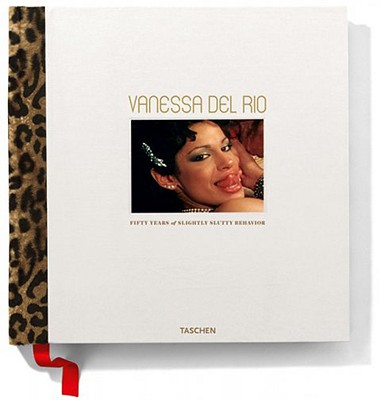 Fifty years of slightly slutty behavior Back in 1974, the sexual revolution was in full swing and the adult entertainment business was on the verge of becoming Big Business. Deep Throat had created America's first porn star in 1972, but by 1974 Linda Lovelace was already retired and the industry was seeking the next big thing. Vanessa del Rio should have been that thing, except in 1974 there were no ethnic sex stars. Undeterred, Vanessa took any role they?d give her, because, amazingly, she was there for the sex more than the money. Fans, awed by her ferocious onscreen sexuality, made her a top box office draw and America's first Latina star. Retired since 1986, Vanessa del Rio remains a sexual icon who cuts across all ethnic boundaries. What her fans don?t know is that her real life was, and is, as wild as anything she did on film. In this sumptuous over-sized volume, TASCHEN celebrates a remarkably candid, confident and exuberantly sexual woman. Presented through Vanessa's own archive, in her own words, is a life at once shocking, titillating, amusing, and inspiring. And because paper and ink can?t do justice to a personality this big, an original 140 minute DVD documentary is included. If you aren?t already convinced, this book will end all doubt that there could ever be another woman like Vanessa del Rio. Vanessa del Rio is limited to a total of 1,500 numbered copies, each signed by Vanessa ? 1,300 copies in the Art Edition ? 200 copies in the Collector's Edition, with a signed watercolor lithograph of Vanessa by acclaimed artist Robert Crumb * Bonus for one lucky reader: one of the 1,500 copies contains a Golden Ticket good for an all-expenses paid evening with Vanessa, to bedocumented by a world famous photographer!! * The author: Dian Hanson is TASCHEN's Sexy Book editor and long time friend of Vanessa del Rio?s. As a 25-year veteran of men's magazine publishing she edited titles including Puritan, Oui, Outlaw Biker, Juggs, Big Butt, and Leg Show. Her most recent books for TASCHEN include Dian Hanson's History of Men's Magazines six volume set, The Big Book of Breasts, Richard Kern's Action and The New Erotic Photography.

"Her whole body and whole gestalt is so amazing. She was the real thing and not being seen, not being recognized. A true Amazon." -- Robert Crumb