Great Pubs of England: Thirty-three of England's Best Hostelries from the Home Counties to the North (Hardcover) 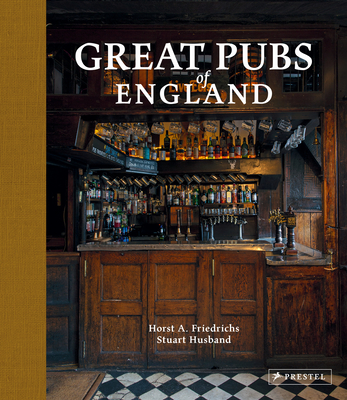 Great Pubs of England: Thirty-three of England's Best Hostelries from the Home Counties to the North (Hardcover)

By Horst A. Friedrichs, Stuart Husband, John Warland (Foreword by)


Usually Arrives to Store in 1-5 Days
From Yorkshire to Swindon, Liverpool to Norfolk, and in every corner of London, England’s illustrious pub culture is celebrated with stunning photography and captivating texts by one of the country’s preeminent travel writers.

“There is nothing that has yet been contrived by man, by which so much happiness is produced as by a good tavern,” wrote Samuel Johnson.

Three centuries on, the English pub remains the ultimate happy place for those seeking refuge, recreation, or refreshment. But pubs today constitute a broad church, with old-school saloons and ultimate locals joined by modern reimaginings of traditional hostelries and Michelin-starred gastro-temples.

This book brings together 33 of England’s finest and most distinctive inns, from Yorkshire dining destinations to Cornish beer shrines. Acclaimed photographer Horst A Friedrichs and renowned writer Stuart Husband capture these places in all their idiosyncratic glory and infinite variety: the pub as artistic statement, social hub, foodie pilgrimage site, personal fiefdom of legendary landlords and landladies, or repository of history.

But all pubs share the same time-honoured purpose: to offer the warmest of welcomes, and to lift the spirits.
STUART HUSBAND is a Hastings-based writer whose work has appeared in Monocle, Four Seasons, the Telegraph, Observer, Sunday Times, and the Independent. He is the author of Bookstores, with Horst A. Friedrichs.

HORST FRIEDRICHS’ photographs have appeared in National Geographic, the New York Times and Stern. Prestel has successfully published eight of his books including: I’m One—20th Century Mods (2009); Or Glory—21st Century Rockers (2010); Cycle Style (2012), Best of British (2016), and Bookstores (2021). He lives in London.