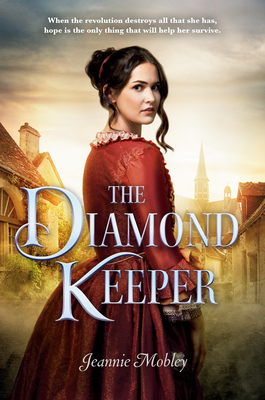 
Usually Arrives to Store in 1-5 Days
A thrilling tale of the elusive Hope Diamond's journey across Europe during the French Revolution, with gorgeous, absorbing writing from Jeannie Mobley!

Eighteen-year-old Claudie Durand's future is planned. She'll take over the family inn, watch her much prettier younger sister, Mathilde, married off to the butcher's son, and live out her days alone, without the hope of finding a love of her own. Her mother ran off to the cloister when she was young, and her gruff, abusive father has deemed her unmarriageable, a nuisance, and only good for hard labor.

But outside their small village in Brittany, a revolution is brewing. When the Army of the Republic seizes their town, and Claudie finds herself at the center of the conspiracy, she and Mathilde must flee their sheltered life and take up a cause that, up till now, had always seemed like a distant conflict. As the sisters carry out a dangerous mission for the resistance: delivering a precious item to the mysterious Rooster of Rennes--Claudie's conscience is torn between the longing to return to her predictable, lonely existence and the desire to carve out a new future, reaching for the life--and love--she never dared dream of but knew deep down she truly deserved.
Jeannie has spent much of her life daydreaming herself into other centuries. This tendency has led her to multiple degrees in history and anthropology, and a passion for writing fiction. She is the author of three historical middle grade novels: Katerina's Wish (2012, McElderry), Searching for Silverheels (2014, McElderry), and Bobby Lee Claremont and the Criminal Element (2017, Holiday House), which have received starred reviews from Booklist, Kirkus Reviews, Publishers Weekly, and Library Media Connection. Other honors include the Willa Award, Colorado Book Award, Junior Library Guild Selection, and inclusion on a number of notable lists, including the Amelia Bloomer List for Feminist Literature, Library of Congress 52 Great Reads List, the New York Public Library Notables, the Jefferson Cup List for Historical Fiction, as well as a variety of state lists. Her favorite stories are those of ordinary people who achieve the extraordinary. She is currently a professor of anthropology and department chair at a college in northern Colorado.