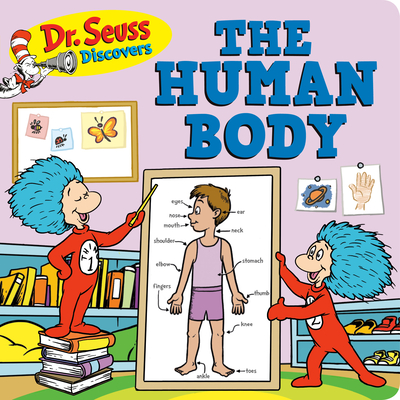 
Usually Arrives to Store in 1-5 Days
Starring the Cat in the Hat, this rhymed Dr. Seuss Discovers non-fiction board book about the human body is perfect for nurturing a love of science in babies and toddlers too young for The Cat in the Hat's Learning Library series!

In this cheerful board book, the Cat and Things One and Two explore the human body, from top to bottom and in-between! Included are simple facts about the sense organs—eyes, ears, nose, tongue, and fingers—as well as fun facts about the legs, knees, feet, hair, and belly button! (The special place where babies are joined to their mothers before they are born.)

Illustrated in bright Seussian style and reviewed for accuracy by noted experts, there's no better way to introduce informational texts or the natural world to pre-readers than with the Cat in the Hat—someone who knows a LOT about having fun!

Look for all the books in the Dr. Seuss Discovers series:
•  Space
•  Bugs
•  Sharks
•  Dinosaurs
•  The Farm
•  Human Body
•  The Ocean
Theodor Seuss Geisel—aka Dr. Seuss—is one of the most beloved children’s book authors of all time. From The Cat in the Hat to Oh, the Places You’ll Go!, his iconic characters, stories, and art style have been a lasting influence on generations of children and adults. The books he wrote and illustrated under the name Dr. Seuss (and others that he wrote but did not illustrate, including some under the pseudonyms Theo. LeSieg and Rosetta Stone) have been translated into 45 languages. Hundreds of millions of copies have found their way into homes and hearts around the world. Dr. Seuss’s long list of awards includes Caldecott Honors, the Pulitzer Prize, and eight honorary doctorates. Works based on his original stories have won three Oscars, three Emmys, three Grammys, and a Peabody.