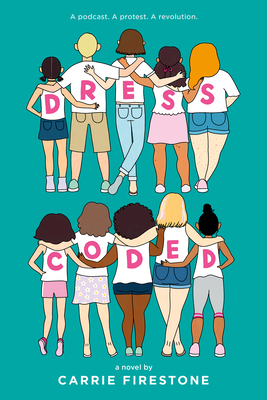 
On Our Shelves Now
In this middle-grade girl-power friendship story, perfect for fans of Moxie, an eighth grader starts a podcast to protest the unfair dress code enforcement at her middle school and sparks a rebellion. Now available in paperback!

Molly Frost is FED UP...

Because Olivia was yelled at for wearing a tank top.

Because Liza got dress coded and Molly didn't, even though they were wearing the exact same outfit.

Because when Jessica was pulled over by the principal and missed a math quiz, her teacher gave her an F.

Because it's impossible to find shorts that are longer than her fingertips.

Because girls' bodies are not a distraction.

Because middle school is hard enough.

And so Molly starts a podcast where girls can tell their stories, and before long, her small rebellion swells into a revolution. Because now the girls are standing up for what's right, and they're not backing down.
Carrie Firestone is the author of the middle grade novels Title TK and Dress Coded, which was a Booklist Editors' Choice and was described by the New York Times as "a much-needed reminder that certain fights are worth fighting," as well as the acclaimed young adult novels The Loose Ends List and The Unlikelies. Visit her online at carriefirestoneauthor.com or follow her on Twitter @CLLFirestone or on Instagram @carriefirestoneauthor.
Four Starred Reviews
A Junior Library Guild Selection
A Kids' Indie Next List Pick
A Booklist Editors' Choice
A Rise: Feminist Book Project Selection
A Bank Street College of Education Best Book of the Year

"A much-needed reminder that certain fights are worth fighting, that while bears of all types may prowl unsettlingly close, fear can be faced down and victories achieved, especially with strength in numbers." --The New York Times

"Full of humor, rage, and heart . . . A triumphant ending shows how systemic change can be made when girls stand together. Absolutely necessary for tweens and teens . . . Straight fire." --Booklist, starred review

"[Dress Coded] addresses deeper issues such as draconian and prejudicial dress codes, body shaming, name calling, bullying, and vaping . . . The story reflects the ups and downs of middle school, and the validation that comes when one successfully stands up for what one believes." --School Library Connection

"With a perfect mix of friendship, humor, and girl power, Dress Coded is a book readers need." --Stacy McAnulty, bestselling author of The Miscalculations of Lightning Girl

"Dress Coded is a compelling, subversive, emotionally astute story of the pernicious effects of everyday sexism and of the revolutionary potential when girls decide to fight back. An electrifying ode to the power of standing up and standing together." --Anne Ursu, author of The Real Boy and The Lost Girl