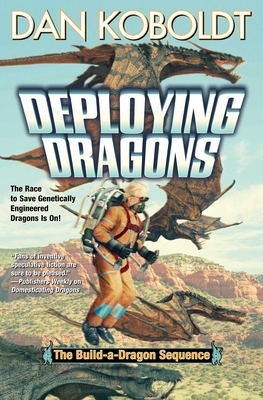 This is book number 2 in the Build-A-Dragon Sequence series.

A BIOTECH RACE AGAINST TIME TO DEVELOP MILITARY-GRADE DRAGONS. Brilliant genetic engineer Noah Parker is pitted head-to-head against the founder of Build-a-Dragon to design custom dragons for the military.

Genetic engineer Noah Parker has at last landed the job he's long coveted: director of dragon design for the Build-A-Dragon Company. With a combination of genetic engineering and a cryptic device known as the Redwood Codex, he and his team can produce living, breathing dragons made-to-order. But sales of dragons have plummeted, and the Build-A-Dragon Company will have to find new revenue streams if it hopes to stay in business. A contract to develop dragons for the U.S. military promises a much-needed lifeline. Yet the specs are more challenging than anything Noah has ever designed. Worse, he learns that a shadow company headed by former CEO Robert Greaves has stolen the dragon-making technology to make a competing bid. Noah’s dragons will face off against those of his old adversary. It’s a head-to-head design competition, with the ethical future of domesticated dragons hanging in the balance.

About Deploying Dragons:
"Full of thrilling invention and discovery and show-stealing dragons, this one is for every reader who’s ever dreamed of riding or at least training their very own winged beast." —Library Journal

"A fast-paced and funny ride, this book will keep readers entertained." —Booklist

About Domesticating Dragons:
“Koboldt delivers a funny and immersive look at the world of genetic engineering. . . . With characteristic verve, Koboldt contrasts the playful adventure plot with eerie dystopian setting and a searing examination of corporate greed and ambition. Fans of inventive speculative fiction are sure to be pleased.” —Publishers Weekly

"It’s entertaining, interesting, and Koboldt does a fantastic job of keeping the pace steady and consistent. All-in-all a fantastic, and definitely different. I’ll take more of this, please!" —SFF World

"Lab-based science fiction, with its grounding in the real world, real situations and people who feel like friends rather than out-of-this-world superheroes is a lot of fun when it’s done right. It’s done right in Domesticating Dragons, with its geeky hero who saves the day, gets the girl and fulfills all of our dreams of dragons." —Reading Reality

About Dan Koboldt:
“. . . very readable and highly enjoyable. . . . Characters that are more than the sum of their parts, a world that has so much to offer, and a story that races along apace . . . ” —SFF World on The World Awakening
Dan Koboldt is the author of the Gateways to Alissia trilogy (Harper Voyager), the editor of Putting the Science in Fiction (Writers Digest, 2018), and the creator of the sci-fi adventure serial The Triangle (Serial Box, 2019). As a genetics researcher, he has coauthored more than 80 publications in Nature, Science, The New England Journal of Medicine, and other scientific journals. Dan is also an avid deer hunter and outdoorsman. He lives with his wife and children in Ohio, where the deer take their revenge by eating the flowers in his backyard.

Dan can be found at dankoboldt.com and on Twitter at @DanKoboldt. On his blog, he runs the popular “Science in Sci-fi / Fact in Fantasy” series, where experts in various fields contribute articles about how to write more realistic fiction. Articles from this series were collected into a book that came out in 2018 from Writers Digest. Koboldt’s “Putting the Science in Science Fiction” blog can be found here: dankoboldt.com/science-in-scifi. He has also written nonfiction articles for Clarkesworld, Apex Magazine, and Baen.com.