The Appeal: A Novel (Hardcover) 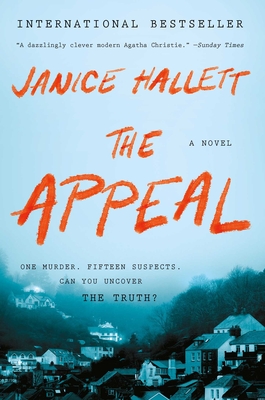 The Appeal: A Novel (Hardcover)


On Our Shelves Now
INTERNATIONAL BESTSELLER

Perfect for fans of Ruth Ware and Lisa Jewell, this international bestseller and “dazzlingly clever” (The Sunday Times, London) murder mystery follows a community rallying around a sick child—but when escalating lies lead to a dead body, everyone is a suspect.

The Fairway Players, a local theatre group, is in the midst of rehearsals when tragedy strikes the family of director Martin Hayward and his wife Helen, the play’s star. Their young granddaughter has been diagnosed with a rare form of cancer, and with an experimental treatment costing a tremendous sum, their castmates rally to raise the money to give her a chance at survival.

But not everybody is convinced of the experimental treatment’s efficacy—nor of the good intentions of those involved. As tension grows within the community, things come to a shocking head at the explosive dress rehearsal. The next day, a dead body is found, and soon, an arrest is made. In the run-up to the trial, two young lawyers sift through the material—emails, messages, letters—with a growing suspicion that the killer may be hiding in plain sight. The evidence is all there, between the lines, waiting to be uncovered.

A wholly modern and gripping take on the epistolary novel, The Appeal is a “daring…clever, and funny” (The Times, London) debut for fans of Richard Osman and Lucy Foley.
Janice Hallett is a former magazine editor, award-winning journalist, and government communications writer. She wrote articles and speeches for, among others, the Cabinet Office, Home Office, and Department for International Development. Her enthusiasm for travel has taken her around the world several times, from Madagascar to the Galapagos, Guatemala to Zimbabwe, Japan, Russia, and South Korea. A playwright and screenwriter, she penned the feminist Shakespearean stage comedy NetherBard and cowrote the feature film Retreat. She lives in London and is the author of The Appeal and The Twyford Code.
“[W]itty, original… a delight; teasing out the mystery is almost as fun as searching for its solution.” —New York Times

“[I]ngeniously plotted…Hallett skillfully lays an intricate and twisty trail of bread crumbs that leads to half a dozen suspects, which should delight those eager for the opportunity to sift through the evidence…a writer to watch.” —Publishers Weekly

"The Appeal is one of the most addictive books I’ve ever read. With its unique and exhilarating structure, its messy and intriguing characters, and an ever-evolving mystery, this novel will consume you from start to finish." —Megan Collins, author of The Family Plot

“[A] brilliantly entertaining epistolary novel . . . .  Readers will get to play investigator right alongside them in this rollicking, and at times laugh-out-loud funny, mystery.”
—Newsweek

“There's every conceivable chance that readers will have a jolly good time sorting through the documents, which are by turns enthralling, catty, contradictory and witheringly funny.” —Shelf Awareness

"Hallett does a fabulous job sharing insights into the various traits of her characters through their correspondence ... THE APPEAL is a fascinating, thrilling and complex novel.” —Book Reporter