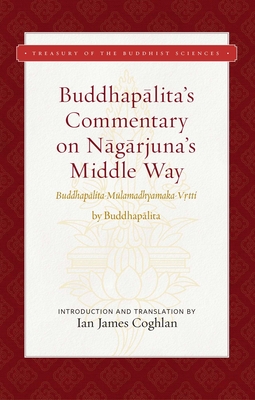 This “Buddhapalita” commentary on Nagarjuna’s famous first-century text Wisdom: Fundamental Middle Way Verses has been considered for over a thousand years by Indian and Tibetan philosophers to be the special key that best unlocks the deep philosophical freedom from confusion and perplexity that the Middle Way (or Centrist) school seeks to provide for its students.

Chandrakirti (seventh century) defended Buddhapalita’s elegant approach as most effective in opening the Middle Way for the inquiring mind to find the liberating experience of reality. Atisha (eleventh century) brought Buddhapalita’s and Chandrakirti’s transformative critical method to spread widely in Tibet, and Tsongkhapa (fifteenth century) provided a clarification of this philosophical work that was so rigorous and crystal clear that it opened the minds of Tibetan philosopher scientists of all schools until today.

Ian Coghlan’s masterful translation makes Buddhapalita’s breakthrough elucidation of the Wisdom Verses clearly accessible. The translator’s unique education combines the Indo-Tibetan geshé curriculum with the modern doctoral training that adds comparative text-critical analysis and comparative language research in Sanskrit as well as Tibetan. This intellectual and experiential education enabled him to produce this reliable translation for the philosophical seeker to fully engage with Buddhapalita’s richly transformative, liberating work.
Ian James Coghlan (Jampa Yignyen) trained as a monk at Sera Jé Monastic University, completing his studies in 1995, and holds a PhD in Asian Studies from La Trobe University. Currently he is a research associate at SOPHIS, Monash University, and translator for the Institute of Tibetan Classics, AIBS, Wisdom Publications, the KAF Foundation, and the Juniper Foundation.

Buddhapalita (ca. 470–540) was born in South India. At an early age he received ordination, entered formal study, and became learned in Buddhist scriptures. In due course, he began to read the works of Nagarjuna under the guidance of Samgharakshita, gaining insight into their meaning through intense meditation. Later he taught at Dantapuri Monastery and while there composed many commentaries to the works of Nagarjuna, Aryadeva, Shura, and so on. Buddhapalita’s only extant work is his commentary to Nagarjuna’s Mulamadhyamakakarika called Buddhapalitamulamadhyamakavrtti.
“Buddhapalita’s commentary on Nagarjuna’s Mulamadhyamakakarika is of the first importance among Indian Madhyamaka texts. It is not only the earliest detailed treatment of Nagarjuna’s masterpiece, but it is the foundation of the entire Prasangika tradition that represents the pinnacle of Indian and Tibetan Buddhist philosophical thought. Buddhapalita opens the structure of Nagarjuna’s arguments and shows us just how to read this difficult verse treatise. Dr. Coghlan offers this Indian classic to the contemporary Western reader through an elegant translation, at once lexically precise, philosophically sensitive, and immediately accessible.”
— Jay Garfield, Smith College

“The Indian commentarial literature is an indispensable key to Nagarjuna’s masterpiece, the Fundamental Verses on the Middle Way. Buddhapalita’s commentary occupies a central place amongst the early works on this foundational Madhyamaka text. I am delighted to see that Ian Coghlan’s lucid translation opens a door to the entirety of Buddhapalita’s profound explanations of the intricacies of Nagarjuna’s thought to an English-speaking audience for the first time. This is a major milestone in the Western study of Madhyamaka and will be an essential resource for students of the Asian philosophical tradition.”
— Jan Westerhoff, University of Oxford