The Serpent Sea: Volume Two of the Books of the Raksura (Mass Market) 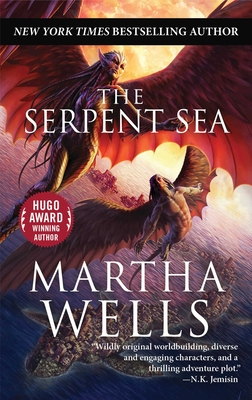 The Serpent Sea: Volume Two of the Books of the Raksura (Mass Market)


Email or call for availability
The Second Novel in the Hugo Award-Nominated Books of the Raksura Series, from New York Times Bestselling Author Martha Wells (The Murderbot Diaries).

Moon, once a solitary wanderer, has become consort to Jade, sister queen of the Indigo Cloud court. Together, they travel with their people on a pair of flying ships in hopes of finding a new home for their colony. Moon finally feels like he’s found a tribe where he belongs.

But when the travelers reach the ancestral home of Indigo Cloud, shrouded within the trunk of a mountain-sized tree, they discover a blight infecting its core. Nearby they find the remains of the invaders who may be responsible, as well as evidence of a devastating theft. This discovery sends Moon and the hunters of Indigo Cloud on a quest for the heartstone of the tree — a quest that will lead them far away . . . across the Serpent Sea.

In this followup to The Cloud Roads, Martha Wells returns with a world-spanning odyssey, a mystery that only provokes more questions — and the adventure of a lifetime.

Martha Wells is the author of more than a dozen science fiction and fantasy novels, including the Ile-Rien series (The Death of the Necromancer), the Murderbot Diaries series (All Systems Red), and the Books of the Raksura (The Cloud Roads). Her work has won the Nebula, Hugo, and Locus Awards, been nominated for the Nebula and Compton Crook awards, and been published in eight languages. Wells lives in College Station, Texas.