Curse of the Reaper: A Novel (Hardcover) 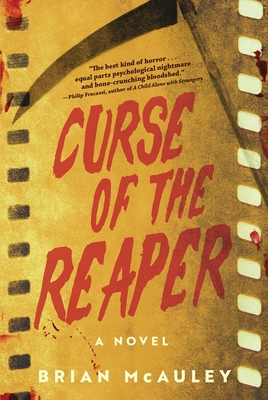 Curse of the Reaper: A Novel (Hardcover)


Coming Soon - Available for Pre-Order Now
Scream meets The Shining in this page-turning horror tale about an aging actor haunted by the slasher movie villain he brought to life.

Decades after playing the titular killer in the 80s horror franchise Night of the Reaper, Howard Browning has been reduced to signing autographs for his dwindling fanbase at genre conventions. When the studio announces a series reboot, the aging thespian is crushed to learn he’s being replaced in the iconic role by heartthrob Trevor Mane, a former sitcom child-star who’s fresh out of rehab. Trevor is determined to stay sober and revamp his image while Howard refuses to let go of the character he created, setting the stage for a cross-generational clash over the soul of a monster. But as Howard fights to reclaim his legacy, the sinister alter ego consumes his unraveling mind, pushing him to the brink of violence. Is the method actor succumbing to madness or has the devilish Reaper taken on a life of its own?

In his razor-sharp debut novel, film and television writer Brian McAuley melds wicked suspense with dark humor and heart. Curse of the Reaper is a tightly plotted thriller that walks the tightrope between the psychological and the supernatural, while characters struggling with addiction and identity bring to light the harrowing cost of Hollywood fame.
Brian McAuley is a WGA screenwriter who has worked on everything from family sitcoms to horror films. He received his MFA in Screenwriting from Columbia University and he teaches at Mount Saint Mary’s University in Los Angeles, where he currently resides. Curse of the Reaper is his first novel.
In Praise of CURSE OF THE REAPER

"At times deliriously fun and delightfully gory. Its blood-filled heart, however, is its main characters and their personal struggles. Both actors, in their own ways, strain under the unrelenting pressure of others’ expectations. To give the Reaper life, McAuley shares snippets of fictional movie screenplays that show the Reaper is just as deadly and entertaining as Jason or Freddy. This book is a must for fans of the slasher genre, but it also offers a sickle-sharp critique of the expendability of actors fed into the Hollywood machine." —Library Journal

“Curse of the Reaper is the best kind of horror—one that’s equal parts psychological nightmare and bone-crunching bloodshed. McAuley’s novel is a grim amalgam, retelling the inner-struggle of a modern day Jekyll and Hyde and blending it (on high!) with every great 80’s slasher movie ever made. Reaper tackles madness, addiction, the costs of stardom, and the innate servitude of every artist whose soul is chained to the growling, hungry beast within. A wonderful, terrifying, thrilling novel not to be missed.”—Philip Fracassi, author of A Child Alone With Strangers

“In Curse of the Reaper, Brian McAuley carves a grinning specter from our cultural addictions to fandom and nostalgia, gleefully ripping through the boundaries between method and madness, pure scares and pitch-perfect schlock. With vividly wounded characters and a true fan’s eye for the horror show, Curse of the Reaper is an unmissable glimpse behind the screen.”—Gordon B. White, author of Rookfield and As Summer’s Mask Slips and Other Disruptions

“The purpose of horror is to access the unconscious fears of the reader and exploit them. Brian McAuley does just that in Curse of the Reaper. An homage to the horror films of the 80's, he delivers horror in a way that will have you clutching the edge of your seat while whipping through the book until the very end. And I enjoyed every single page of it.”—Tracy Cross, author of Rootwork

“Brian McAuley takes Method acting to maniacal meta-horror heights in his Poe-infused slasher Curse of the Reaper, which reads like a pitch-perfect riff off of Peter Bogdanovich’s Targets, a Los Angeles-cast Cask of Amontillado, and a Jerry Stahl-penned tug-of-war between Boris Karloff and Kane Hodder. Read it.” —Clay McLeod Chapman, author of The Remaking and Ghost Eaters

“A love letter to slashers, and a nod to our addictions. To drugs, to fame. To the memories of who we once were.” —Jamie Flanagan, co-writer of Netflix’s Midnight Mass and The Haunting of Bly Manor

“McAuley's Curse of the Reaper is a clever and creepy romp through the slasher genre, reveling in how it haunts and delights us, and how the real horror never, really ever ends.” —Kate Maruyama, author of Harrowgate and Family Solstice