The Ecclesiastical History of Sozomen: From Ad 324 to Ad 425 (Christian Roman Empire #12) (Paperback) 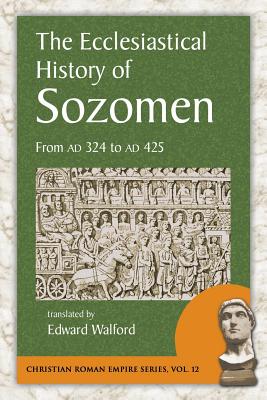 The Ecclesiastical History of Sozomen: From Ad 324 to Ad 425 (Christian Roman Empire #12) (Paperback)

The fourth and fifth centuries AD were an era of intense political and spiritual turmoil in the Roman world, when ancient institutions suddenly crumbled and brilliant new edifices emerged from the rubble. Covering the momentous years between AD 324 and 425, the Ecclesiastical History of Sozomen is one of the most important primary histories of this period of upheaval and transition.

A religious historian sympathetic to orthodoxy, Sozomen's focus is on the various quarrels, councils, schisms and reconciliations which roiled the Church at the time when Christians exited the catacombs and entered directly into the imperial administration. He provides exceptionally detailed descriptions of the heresy of Arius and the resulting religious controversies which followed the Council of Nicaea, including the recurring depositions and reinstatements of Saint Athanasius as bishop of Alexandria. With an obvious personal interest in monasticism, Sozomen provides some of the best contemporary accounts of the lives and deeds of famous monks from across the Roman world.

Chronicling occurrences over the course of a century, Sozomen's History is an invaluable source on the fateful reigns of emperors such as Constantine the Great, Constantius II, Julian the Apostate, Valens, Theodosius the Great, and the empress Pulcheria. He provides anecdotes about Popes like Julius I, Liberius, and Innocent I, and great saints such as Anthony of Egypt, Ambrose of Milan, and John Chrysostom. He also includes verbatim reproductions of various ancient letters and edicts which circulated among saints, heretics and emperors as they debated the momentous religious and political questions of the age.

Drawn from the elegant Bohn Ecclesiastical Library translation of 1855, this edition of Sozomen's History has been completely re-typeset for the modern reader. Obvious typographical errors in the original text have been corrected, and punctuation has been modernized to aid with text flow. To help make the text more accessible for students and general readers, this edition also includes numerous updated explanatory notes, a current bibliography, and an index of people, places and key terms.