In Sheep's Clothing: Understanding and Dealing with Manipulative People (Paperback) 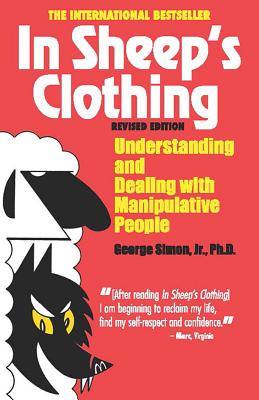 In Sheep's Clothing: Understanding and Dealing with Manipulative People (Paperback)

Dr. George Simon knows how people push your buttons.  Your children--especially teens--are expert at it, as is your mate.  A co-worker may quietly undermine your efforts while professing to be helpful, or your boss may prey on your weaknesses.  Manipulative people have two goals: to win and to look good doing it.  Often those they abuse are only vaguely aware of what is happening to them.  In this eye-opening book, you'll also discover...

* 4 reasons why victims have a hard time leaving abusive relationships

* How to spot potential weaknesses in your character that can set you up for manipulation.

Dr. George Simon received his Ph.D. in clinical psychology from Texas Tech University. As a private practitioner and consultant, he specialized in disturbances of personality and character for more than 25 years.

He has appeared on several national radio and television programs, including Fox News Network and CNN, given more than 300 workshops and seminars nationwide, and consulted to numerous businesses, agencies, and organizations seeking his expertise on character disturbance. His book, “In Sheep’s Clothing:  Understanding and Dealing with Manipulative People,” regarded by many as the premier book on manipulation, has remained a bestseller for over 17 years, and has enjoyed a five-star rating since it debuted with both Amazon.com and Barnes & Noble.com.  A newly revised and expanded edition was published by Parkhurst Brothers in 2010.

In August 2010, Parkhurst Brothers released Dr. Simon’s second book: “Character Disturbance: The Phenomenon of Our Age.” This groundbreaking book takes an in-depth look at how the modern age of permissiveness and entitlement has fueled an epidemic of responsibility-challenged personalities, provides common sense guidelines for understanding and dealing with impaired characters, and outlines the steps societies must take to promote solid character formation in their citizens.

In 2013, Abingdon Press released Dr. Simon’s first book written exclusively for the Christian faith community, “The Judas Syndrome.” Only six days after its release, it received its first five-star review on Amazon.com.  In this book, Dr. Simon shares his observations about the power of genuine faith to heal and transform.

Until recently, Dr. Simon maintained an active private practice dedicated to assisting individuals develop character. In addition to providing psychotherapy services to persons interested in character development, he specialized in comprehensive personality assessments, mental health professional training, consultations to businesses and organizations, and support services to individuals in relationships with problem characters.  He has posted more than 150 Internet articles, and is on the faculty of several popular international blogs.

Perhaps one of his proudest achievements, Dr. Simon is also the principal composer of “Anthem for the Millennium (America, My Home!).” The song gained popularity when a regional television station paired it with a video montage after the 9-11 attacks, and it has now been performed live to audiences totaling over one million.

More information about Dr. Simon may be found on his blog: www.manipulative-people.com or his website:  www.drgeorgesimon.com.

”Thank you for your book, In Sheep’s Clothing. My husband and I saw several counselors to help us through the problems we were having with my mother-in-law who is immature and manipulative. The counselors spent most of their time trying to get me [to accept her], instead of teaching me [as only your book did] ways to cope with her manipulation.”

“I've not read a more eye opening book. It hits the problem nail right on the head. If you suspect someone is manipulating you, please read this most valuable book. It will truly pull the wool off of your eyes.”

— Carnelian, a reader in New England