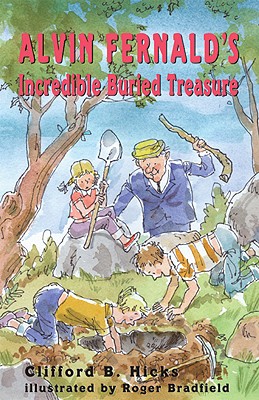 
Email or call for price
Alvin Fernald is back Not only back, but he finds himself in the middle of a mystery as exciting and hilarious as The Marvelous Inventions of Alvin Fernald, Alvin's Secret Code and the seven other chaotic adventures of this famous series. Alvin reaches back to the Civil War, at least figuratively, to bond with a boy who buried a national treasure in order to save it. With the aid of the Pest (Alvin's sister Daphne), and his best friend Shoie, Alvin solves a secret message to reveal the whereabouts of the treasure. Clifford B. Hicks has written another classic which both kids and adults will enjoy.