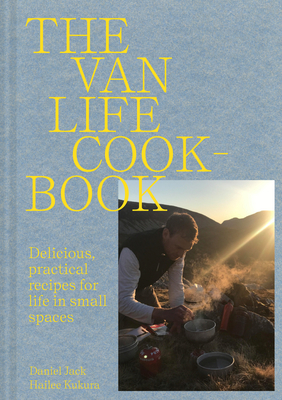 
Email or call for availability
Maximize time outdoors, minimize time in supermarkets, and eat more thriftily with this mindful approach to cooking on the road, featuring 80 versatile recipes


Going beyond recipes that can be made on a 2-ring gas hob, this book is about an approach to cooking that saves money and time, is good for health, and finds the best from the immediate environment. Digging below the surface and looking past the convenience of the supermarket, takeouts, and fast food, there’s a whole world of independent producers waiting to be discovered.

The idea of this book came about in the summer of 2020 when husband and wife duo Danny and Hailee put the finishing touches to their campervan toward the end of the nationwide UK lockdown. When work dried up in the kitchen, the van provided an essential space for them to escape to nature. By telling their story and sharing helpful hints of what worked and what didn’t, they hope to inspire others. Danny is a chef who built a kitchen on wheels, but the same principles also apply to kitchens on boats or cabins.

Danny Jack began working as a chef in restaurant kitchens rooted in the Anglo-French tradition, in particular The Dogs, in Edinburgh. After relocating to London, he branched out beyond the restaurant environment, hosting his own events and catering to London weddings.

Hailee Kukura is originally from the small San Juan island community in the Pacific Northwest of America. She moved to Scotland to study at the University of Edinburgh. Now living in London, she is a project manager for the V&A museum.