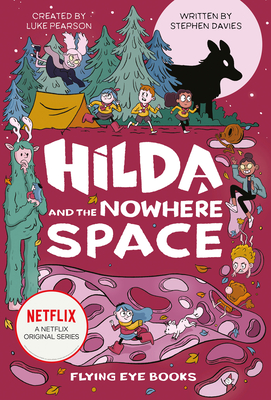 This is book number 3 in the Hilda Tie-In series.

WATCH SEASONS ONE AND TWO OF HILDA THE ANIMATED SERIES NOW ON NETFLIX!

Craving more adventures with your favorite blue-haired Sparrow Scout? This is the book for you! More badges, more thrills, more friends in the newest Hilda illustrated chapter book!

Meet Hilda: explorer, adventurer, avid sketchbook-keeper and friend to every creature in the valley!

Newly initiated into the Sparrow Scouts, Hilda is ready to explore and document the wilderness, and perhaps even make some human friends. Yet as luck would have it, there is a dark, menacing creature afoot near Trolberg, and Hilda is whisked back home to safety. Even so, intrigue seems to follow our blue-haired heroine wherever she goes, and it seems we may finally discover why so many socks in Trolberg seem to lose their mates.
Luke Pearson is the creator of the Hilda series of comics. He is also a writer and co-executive producer of the Bafta winning animated series of the same name. Outside of Hilda, he has been an illustrator, a storyboard artist and has drawn a range of other comics. He lives with his family in Nottingham.
Hilda is now on Netflix! Season 1 is the WINNER of the BAFTA Children's Award for Best Animated Series 2019! Season 2 is out now!

"Once again the team of Davies and Miller transform Luke Pearson’s graphic story into a novel and once again, they do a wonderful job."
—Youth Services Book Review