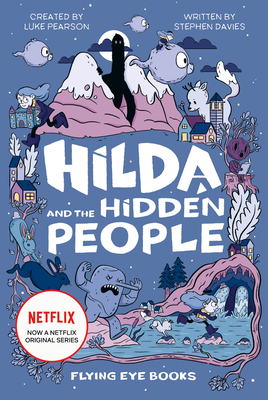 This is book number 1 in the Hilda Tie-In series.

WATCH SEASONS ONE AND TWO OF HILDA THE ANIMATED SERIES NOW ON NETFLIX!

Meet Hilda: explorer, adventurer, avid sketchbook-keeper and friend to almost every creature in the valley! Join our beloved heroine as she encounters her very first troll, negotiates peace with some very persnickety elves, and reunites two lovelorn ancient giants. Fantastic creatures and daring adventures are all just part of another average day for Hilda, but what will she do if she is forced to move to Trolberg city, far away from her beloved valley home? Dive into the adventure with this illustrated chapter book, based on the first two episodes of the show.
Luke Pearson is the creator of the Hilda series of comics. He is also a writer and co-executive producer of the Bafta winning animated series of the same name. Outside of Hilda, he has been an illustrator, a storyboard artist and has drawn a range of other comics. He lives with his family in Nottingham.
Hilda is now on Netflix! Season 1 is the WINNER of the BAFTA Children's Award for Best Animated Series 2019! Season 2 is out now!

“Dynamic cartoon art brings the book to life, Hilda’s bravery is an inspiration, and the world’s details—the giant she chats with, the rabbit-riding elf army—will pull readers in.”
—Publishers Weekly

“The Hilda books are already beloved favorites of many kids; the Netflix series and these chapter books are likely to get her even more fans.”
—The Beat