The de Thematibus ('on the Themes') of Constantine VII Porphyrogenitus: Translated with Introductory Chapters and Notes (Translated Texts for Byzantinists Lup) (Hardcover) 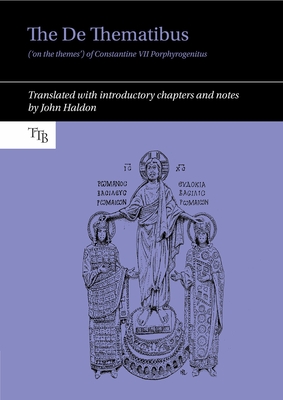 The de Thematibus ('on the Themes') of Constantine VII Porphyrogenitus: Translated with Introductory Chapters and Notes (Translated Texts for Byzantinists Lup) (Hardcover)


Email or call for price
The 10th-century treatise on the military provinces (the 'themes') of the medieval East Roman (Byzantine) empire is one of the most enigmatic of the works ascribed to the emperor Constantine VII Porphyrogennetos. A mix of historical geography, imperial propaganda, historical information and
legend or myth drawn from ancient, Hellenistic as well as Roman and late Roman sources, it was one of the emperor's earliest works, although the extent to which he was its author remains debated. Its purpose, and the emperor's aims in commissioning or writing it, are equally unclear, since it offers
neither an accurate historical account of the evolution of the themata nor does it appear to draw on available administrative material that would have been available to its writer. It has remained until now untranslated into English and thus inaccessible to many, in particular to students at all
levels both within and outside the field of Byzantine Studies, as well as non-specialist readers. This volume is intended to rectify this situation with a translation into English, accompanying detailed notes, and three introductory chapters providing context and background to the history of the
text, Byzantine ideas about geography, and the debate over the themata themselves.

John Haldon is Shelby Cullom Davis '30 Professor of European History, emeritus and Professor of Byzantine History & Hellenic Studies, emeritus, Princeton University. He is Director, Climate Change and History Research Initiative and Director, Environmental History Lab, Program in Medieval Studies, Princeton University. His many books include: Byzantium in the iconoclast era, 680-850. A history (CUP 2011) (with L. Brubaker); A critical commentary on the Taktika of Leo VI (Dumbarton Oaks 2014); A Tale of Two Saints: The Passions and Miracles of Sts Theodore 'the recruit' and 'the general' (LUP2016) and The empire that would not die. The paradox of eastern Roman survival 640-740 (Harvard University Press 2016).