Truth Triumphant: The Church in the Wilderness - A Christian History from Apostolic Times to Modernity (Paperback) 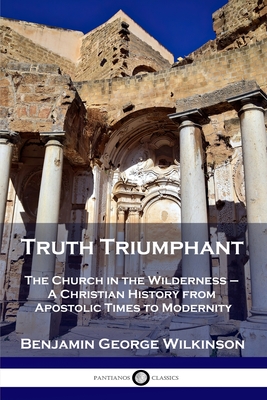 Truth Triumphant: The Church in the Wilderness - A Christian History from Apostolic Times to Modernity (Paperback)

This history of the church details the establishment of Christian churches whose stated beliefs stand outside of the Catholic doctrine. Wilkinson's enquiry spans from the Apostolic era through to modern times.

Variously thought of as remnants of the old church which persisted after the Roman Catholic, or as distinct Christian communities which sprang up spontaneously in various countries and communities, the church in the wilderness is an important - and commonly neglected - part of Christian history. The author thoroughly researched the emergence of these denominations, many of whom predate the Reformation of the Renaissance. Examples of such movements were observed in Europe, Turkey, the wider Middle East, as well as India.

For professing a close adherence to the Bible scriptures, as opposed to following the hierarchical doctrines of the Catholic Church, these disparate groups were branded heretics and persecuted. Such periodic persecutions occurred across centuries, and punishments were commonly harsh. Despite this, the Christians who rejected the Catholic doctrines persevered - the spirit and word of the original Bible gospels their guide and authority.