A Story About Cancer With a Happy Ending (Hardcover) 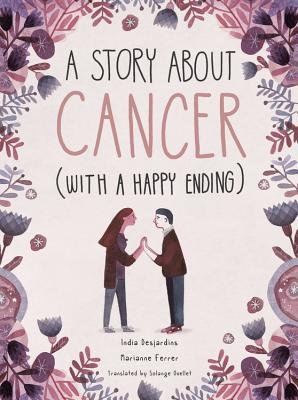 A Story About Cancer With a Happy Ending (Hardcover)

When visiting a hospital in Montreal, Quebec, a few years ago, best-selling author India Desjardins met a 10-year-old girl with leukemia. The girl told her she that she was fed up. All the stories about children like her who had cancer had sad endings, so she didn’t want to read them. She asked India to write a story about cancer with a happy ending instead, one with laughter and romance. India did, and the story became this book.

I think about everything I'll miss if they tell me I'm going to die…my mom, my dad, my sister, cookies, TV shows I'll never get to see the end of, walking outside when it's really nice, the smell of autumn, the starry sky on a full moon, my grandparents, my grandpa's lasagna, kissing Victor, Victor's eyes, Victor's voice, Victor's smell, Victor's hands…Victor.

A teenage girl heads towards the hospital waiting room where the doctors are going to tell her how much time she's got to live. As she walks, she thinks about her journey up to this point…the terrible decor in the hospital, wearing a headscarf, the horrible treatments, but also being with her friends, family, and her new boyfriend Victor.

While this story has a happy ending, the girl offers an honest account of what it feels like to be a teenager with cancer. Like how she just wants everyone to treat her like a normal person and stop telling her how strong she is—especially her mom. And how, even though everyone is telling her to stay positive, she sometimes loses hope and even wants to die to make the pain go away. Dreamlike illustrations elegantly convey the emotional complexities.

Like the girl in this story, the girl that India met at the hospital is now cured. She also fell in love during her illness. Today, around eight out of ten children who are diagnosed with cancer are cured. This story was written to give any child who has cancer hope.

India Desjardins is a French-Canadian writer who lives in Quebec. Her eight-book series The Journal of Aurélie Laflamme has been adapted for the big screen and sold more than 2 million copies in the French language. Her picture book, Marguerite's Christmas, illustrated by Pascal Blanchet, won the prestigious Bologna Ragazzi Fiction Prize. She has also written two volumes of the comic La Célibataire.

Marianne Ferrer was born in Venezuela. She came to Canada in 1998 to pursue her artistic tendencies. There, she acquired several illustration techniques, eventually finding her distinctive deep, moody style. She currently works as an illustrator in Montréal.