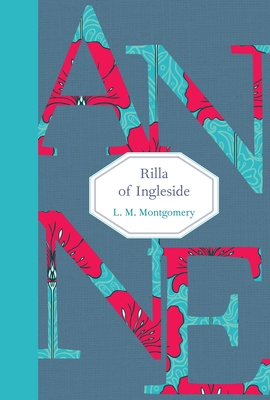 This is book number 8 in the Anne of Green Gables series.

It's 1914 and the world is on the brink of war. But at almost fifteen, Anne and Gilbert's youngest daughter, Rilla, dreams only of her first dance and getting her first kiss from the dashing Kenneth Ford. Soon, however, even far-off Ingleside is engulfed by Europe's raging conflict, as Rilla's brothers Jem and Walter both enlist, and Rilla finds herself caring for an orphaned newborn.
As the conflict spreads, the Blythes wait anxiously for word of their absent sons, and a bad omen leads them to conclude that something terrible has happened overseas. Have Jem and Walter been lost, like so many valiant young men before them? And what of Kenneth Ford? Will he ever return to Ingleside to keep the promise he made to Rilla before he left?
In this final book in the Anne of Green Gables series, young Rilla Blythe is swept into a drama that tests her courage and changes her life forever.
Lucy Maud Montgomery (1874-1942) was born in what is now New London, Prince Edward Island, and raised by her grandparents after the death of her mother when she was just two. She worked for a time as a teacher and a journalist, then wrote her first novel, Anne of Green Gables, in the evenings while caring for her grandmother. When the book appeared in 1908, it was an instant success; it would go on to sell millions of copies in dozens of languages the world over, making Anne one of literature's most beloved characters of all time.