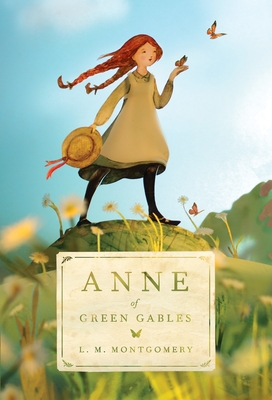 This is book number 1 in the Anne of Green Gables series.

When Marilla Cuthbert and her brother, Matthew, decide to adopt a child from a distant orphanage, they don't get quite what they bargained for. The child who awaits them at the tiny Bright River train station is not the strapping young boy they'd imagined--someone to help Matthew work the fields of their small farm--but rather a freckle-faced, redheaded girl named Anne (with an e, if you please).
Matthew and Marilla may not be sure about Anne, but Anne takes one look at Prince Edward Island's red clay roads and the Cuthberts' snug white farmhouse with its distinctive green gables and decides that she's home at last. But will she be able to convince Marilla and Matthew to let her stay?
Armed with only a battered carpetbag and a boundless imagination, Anne charms her way into the Cuthberts' hearts--and into the hearts of readers as well. She truly is, in the words of Mark Twain, "the dearest and most lovable child in fiction since the immortal Alice."

Lucy Maud Montgomery (1874-1942) was born in what is now New London, Prince Edward Island, and raised by her grandparents after the death of her mother when she was just two. She worked for a time as a teacher and a journalist, then wrote her first novel, Anne of Green Gables, in the evenings while caring for her grandmother. When the book appeared in 1908, it was an instant success; it would go on to sell millions of copies in dozens of languages the world over, making Anne one of literature's most beloved characters of all time.

Elly MacKay is a paper artist and a children's book author and illustrator. She studied illustration and printmaking at the Nova Scotia College of Art and Design and at the University of Canterbury, in New Zealand. Her distinctive pieces are made using paper and ink, and then are set into a miniature theatre and photographed, giving them their unique three-dimensional quality. Elly lives in Owen Sound, Ontario, with her husband and two children.