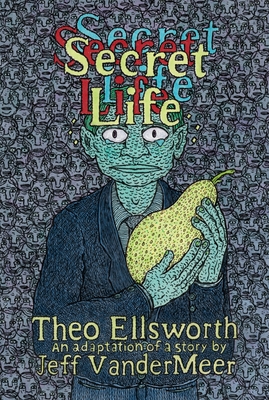 Think "The Office" written by Franz Kafka under the influence of LSD.Unquestionably brilliant adaptation of a small masterpiece, without a net and worth every effort it requires. Gloriously weird in the best of all possible ways.

An uncanny and eye-opening journey into a mysterious building, adapted from a short story by Jeff VanderMeer

To the west: trees. To the east: a mall. North: fast food. South: darkness. And at the centre is The Building, an office building wherein several factions vie for dominance. Inside, the walls are infiltrated with vines, a mischief of mice learn to speak English, and something eerie happens once a month on the fifth floor. In Secret Life, Theo Ellsworth uses a deep-layered style to interpret Nebula award-winning author Jeff VanderMeer’s short story. What emerges is a mind-bending narrative that defamiliarizes the mundanity of office work and makes the arcane rituals of The Building home.

When his manager borrows his pen for a presentation, a man is driven to unspeakable acts as he questions the role the pen has played in his workplace success. The despised denizens of the second floor develop their own tongue, incomprehensible to everyone else in The Building. A woman plants a seed of insurgency that quickly permeates every corner of the building with its sweet, nostalgic perfume.

With deft insight, Secret Life observes the sinister individualism of bureaucratic settings in contrast with an unconcerned natural world. As the narrative progresses you may begin to suspect that the world Ellsworth has brought to life with hypnotic visuals is not so secret after all; in fact, it’s uncannily similar to our own.

Jeff VanderMeer is the author of Dead Astronauts, Borne, and The Southern Reach Trilogy, the first volume of which, Annihilation, won the Nebula Award and the Shirley Jackson Award and was adapted into a movie by Alex Garland starring Natalie Portman. VanderMeer speaks and writes frequently about issues relating to climate change. He grew up in the Fiji Islands and now lives in Tallahassee, Florida, with his wife, Ann VanderMeer, and their cats, plants, and bird feeders.

"This is a vision of office life gone very surreal, with warring tribes who develop their own language and mice who learn to speak English."—New York Times

"The incendiary collision of two singular talents… Ellsworth adapts VanderMeer’s tale of a mysterious building where 'office culture' connotes secret languages and unspoken rituals, and a cherished desk plant with a tantalizing fragrance grows to menacing proportions."—Poets and Writers Magazine

"Secret Life captures the dark pulsing horror of office life with a bizarre honesty found only in bad dreams and good nightmares. An engrossing, unsettling, beautiful work."—Patrick McHale, Over the Garden Wall

"An allegory about work life like no other."—NOW Magazine