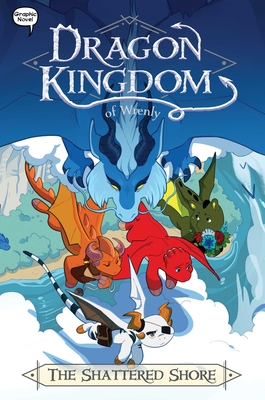 This is book number 8 in the Dragon Kingdom of Wrenly series.

In the eighth installment of the exciting Dragon Kingdom of Wrenly graphic novel chapter book series, Ruskin and his friends travel to a distant island.

Ruskin, Cinder, Groth, and Roke join the entire Dragon Kingdom on a trip to the Shattered Shore to say goodbye to Villinelle, the Witch-Dragon who was both an enemy and a friend. This mystical island serves as the entrance to the dragon After Realm, but there are more secrets to be discovered on the Shattered Shore that may help with the larger battle to come.
Jordan Quinn grew up in a fairy tale castle in England. It had a spiral stone staircase, a moat, and a dungeon. As a child she liked to play hide-and-go-seek and ride her beloved horse, Prince Charming. When she wasn’t riding, she wrote stories about fairies, trolls, dragons, and wizards. Today, Jordan lives on a ranch in California with her husband, son, and a golden retriever named Sir Toots-a-Lot.