The Church and the Age of Reformations (1350-1650): Martin Luther, the Renaissance, and the Council of Trent (Paperback) 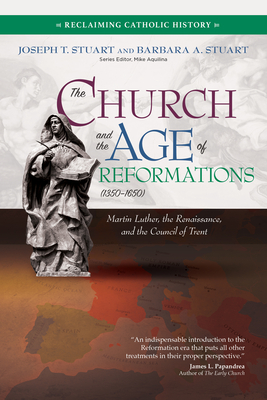 The Church and the Age of Reformations (1350-1650): Martin Luther, the Renaissance, and the Council of Trent (Paperback)

In 1517, Augustinian monk Martin Luther wrote the infamous Ninety-Five Theses that eventually led to a split from the Catholic Church. The movement became popularly identified as the Protestant Reformation, but Church reform actually began well before the schism.

In The Church and the Age of Reformations (1350-1650), historian Joseph T. Stuart and theologian Barbara A. Stuart highlight the watershed events of a confusing period in history, providing a broader--and deeper--historical context of the era, including the Council of Trent, the rise of humanism, and the impact of the printing press. The Stuarts also profile important figures of these tumultuous centuries--including Thomas More, Teresa of vila, Ignatius of Loyola, and Francis de Sales--and show that the saints demonstrated the virtues of true reform--charity, unity, patience, and tradition.

A map and chronology are included.

Books in the Reclaiming Catholic History series, edited by Mike Aquilina and written by leading authors and historians, bring Church history to life, debunking the myths one era at a time.