The Science of Subtle Energy: The Healing Power of Dark Matter (Paperback) 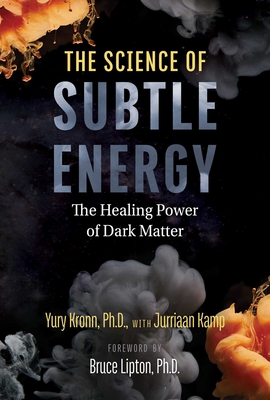 The Science of Subtle Energy: The Healing Power of Dark Matter (Paperback)

By Yury Kronn, Jurriaan Kamp (With), Bruce Lipton (Foreword by)

• Shares the results of the author’s rigorous, repeatable, and predictable experiments with subtle energy

• Shows how the mind interacts with matter by means of subtle energy--the key to the placebo effect, the healing power of affirmations and prayers, and energy medicine

Instruments of modern physics can measure the energies of the electromagnetic spectrum, but these energies only account for roughly 4 percent of the total identifiable mass-energy of the universe. What makes up the remaining 96%?

In this scientifically based yet accessible analysis, Yury Kronn, Ph.D., explores the nature of the remaining 96% of the universe’s mass-energies. Contemporary science calls this massenergy “dark matter,” and the ancients called it life force, prana, or chi. Kronn shows how this subtle energy belongs to the subatomic world and how it follows laws that are fundamentally different from those known to contemporary science.

Sharing the results of his rigorous, repeatable, and predictable experiments with subtle energy, the author looks at the possible mechanisms of subtle energy’s interaction with physical matter and with the human body. He shows how the mind interacts with matter by means of subtle energy—giving us the key to understanding the placebo effect and extrasensory perception as well as the healing power of affirmations and energy medicine. Kronn demonstrates how it’s possible to harness subtle energy and explains his development of Vital Force Technology, which integrates ancient knowledge of the life force with modern technology to generate specific subtle energy formulations for practical applications. He presents his experimental results creating subtle energy formulas to positively influence the germination of seeds and the growth of plants. He also demonstrates the possibility of using subtle energy for creating clean and energetic-pollution-free environments for vitality and better healing.

Outlining the many benefits of subtle energy technology to individuals, societies, and the planet as a whole, Kronn reveals how the transformative power of subtle energy arises from the vast potential of human consciousness.
Yury Kronn, Ph.D. (1935-2021), was a world-renowned scientist, inventor, and leading theoretician in physics. He earned his doctorate at Russia’s prestigious Gorky University and was awarded a Doctor of Sciences degree by Lebedev Physical Institute of Moscow. The coauthor of Resonant Nonlinear Interactions of Light with Matter, as well as the author of more than 80 scientific articles, he was involved in subtle energy physics research for the last 30 years of his life.
“A fascinating account of a high technology designed to record and use subtle energies. Kronn’s impressive background as a physicist adds credibility to his methods, and the experiments reported in this book will be of vital interest to anyone studying the still-mysterious phenomenon of subtle energies.”
— Dean Radin, Ph.D., chief scientist at the Institute of Noetic Sciences and author of Real Magic

“Yury Kronn’s The Science of Subtle Energy is a formidable work that should be read by both the general public and the scientific community. The general reader will be spellbound with tales of scientific discovery through the ages, and the scientist will once again be reminded that many, if not most, serious scientific breakthroughs have been met with derision by members of the academy, who protect their established ‘truths’ from threats of novel experiment and novel theory. The Science of Subtle Energy is a threatening book. Kronn has meticulously outlined both novel experiments and novel theory to grapple with perhaps the greatest scientific puzzle ever--what is the mysterious dark matter and dark energy that makes up the vast majority of the universe and about which we know essentially nothing? Kronn makes a compelling case that the study of ‘subtle energies’ provides the key. This isn’t just conjecture. Herein he presents innumerable experimental data and a novel technology that deserve careful scrutiny and replication by others. For the intellectually curious, what might be the implications, both theoretical and practical, if even some of his work bears fruit? Wow.”
— William F. Bengston, Ph.D., president of the Society for Scientific Exploration

“The Science of Subtle Energy is both exciting and frustrating. The excitement comes from following the intellectual trail Yury Kronn has mapped from the early years of recognizing the existence of subtle energy and its potential positives and negatives to his own work demonstrating the practical applications of Vital Force Technology to his predictions of additional benefits to be obtained with further in vitro and in vivo research. The frustration stems from wanting to move faster to exploit the broad spectrum of potential indications of subtle energy, while simultaneously limiting deleterious effects that may well be manifested in our world of electronic contamination. The Science of Subtle Energy is a page-turner, an eye-opener, and an inducer of humbleness as we learn how little we know and how difficult it is to alter paradigms in the face of new information.”
— John McMichael, Ph.D., immunologist, virologist, and founder of Milkhaus Laboratory, Inc.