After the Lights Go Out (Hardcover) 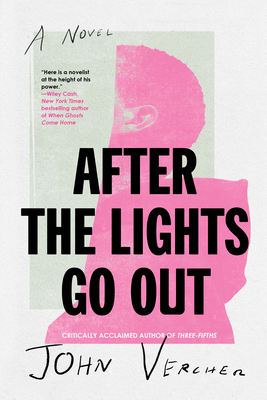 After the Lights Go Out (Hardcover)


On Our Shelves Now
A harrowing and spellbinding story about family, the complications of mixed-race relationships, misplaced loyalties, and the price athletes pay to entertain—from the critically acclaimed author of Three-Fifths

Xavier “Scarecrow” Wallace, a mixed-race MMA fighter on the wrong side of thirty, is facing the fight of his life. Xavier can no longer deny he is losing his battle with chronic traumatic encephalopathy (CTE), or pugilistic dementia. Through the fog of memory loss, migraines, and paranoia, Xavier does his best to stay in shape by training at the Philadelphia gym owned by his cousin-cum-manager, Shot, a retired champion boxer to whom Xavier owes an unpayable debt.

Xavier makes ends meet while he waits for the call that will reinstate him after a year-long suspension by teaching youth classes at Shot’s gym and by living rent-free in the house of his white father, whom Xavier was forced to commit to a nursing home. The progress of Sam Wallace’s end-stage Alzheimer’s has revealed his latent racism, and Xavier finally gains insight into why his Black mother left the family years ago.

Then Xavier is offered a chance at redemption: a last-minute high-profile comeback fight. If he can get himself back in the game, he’ll be able to clear his name and begin to pay off Shot. With his memory in shreds and his life crumbling around him, can Xavier hold on to the focus he needs to survive? John Vercher, author of the Edgar and Anthony Award–nominated Three-Fifths, offers a gripping, psychologically astute, and explosive tour de force about race, entertainment, and healthcare in America, and about one man’s battle against himself.
John Vercher lives in the Philadelphia area with his wife and two sons. He has a Bachelor’s in English from the University of Pittsburgh and an MFA in Creative Writing from the Mountainview Master of Fine Arts program. He is a contributing writer for WBUR Boston’s Cognoscenti, and NPR features his essays on race, identity, and parenting. His debut novel, Three-Fifths, was named one of the best books of the year by the Chicago Tribune, CrimeReads, and Booklist. It was nominated for the Edgar, Anthony, and Strand Magazine Critics’ Awards for Best First Novel.
Praise for After the Lights Go Out

“A knockout . . . The sweet science and its permutations also allow for exploration of issues like access to healthcare, race and class. John Vercher’s sophomore novel, After the Lights Go Out, approaches these topics like a fighter hitting the heavy bag, applying a keen eye and ear to make the story and language 'bounce up and down, not swing.”
—The Pittsburgh Post-Gazette

“John Vercher’s new novel of an MMA fighter on his last legs is just as depressing as you think it’d be (after all, don’t we turn to stories of aging fighters precisely because they are so bleak?). I will say, that if you don’t at least tear up while you read this, then you are a heel who deserves all the boos the crowd can throw at you. Oh, for those who need to know this before you start reading, the Dog Does Not Die."
—CrimeReads

“Vercher has delivered on every single expectation I had for his sophomore effort, and he did so with flair. A novel that takes place in the world of mixed martial arts, After the Lights Go Out is an impressive narrative that deals with a broken family, racial tension, dementia, and the world of fighting.”
—Gabino Iglesias, LitReactor

“Excellent . . . John Vercher has set his standard even higher with his second book.”
—Writer's Bone Podcast

“There is no sophomore slump . . . [Vercher] continues to take a hard look at fractured family dynamics, race, loyalty, and specific to this novel, the fragility of the mind.”
—Words & Sports

“John Vercher’s latest is a spellbinding tour de force. It’s the gut-wrenching story of Xavier 'Scarecrow' Wallace, an over-the-hill MMA fighter still looking for that last shot at redemption, even as his mind and body succumb to the ravages of his years spent in the cage. Written in deft and visceral prose—Vercher’s trademark—After the Lights Go Out is one of the best books I’ve read this year. I loved every moment of it, even the ones that broke my heart.”
—Lauren Wilkinson, author of American Spy

“Vercher gives us a nuanced, troubled protagonist trying to keep his head up in a dark and dangerous world. His novel is troubling, powerful, and ultimately, surprisingly, poignant.”
—Ben H. Winters, author of The Last Policeman and Underground Airlines

“John Vercher writes like a fighter, a dancer, an athlete. The prose is nimble and nothing on the page is wasted. His writing knows when to throw a punch, and, in a novel that explores the intersection of race, class, celebrity, and healthcare, John Vercher leaves it all in the ring. Here is a novelist at the height of his power. After the Lights Go Out left my heart black and blue, and I loved every moment of the beating it took.”
—Wiley Cash, New York Times bestselling author of When Ghosts Come Home

"One person's entertainment is another's extraordinary trauma of the mind, body, and soul in John Vercher's stunning, stone-cold knockout, After the Lights Go Out. Heart-wrenching in its portrayal of anger, betrayal, and the value placed on the bodies of combat athletes, Vercher's novel is as relentless as it is unforgettable. Brutally elegant prose, jet fuel-like propulsiveness, and Vercher's powerhouse voice force us to confront a profound and tragic question: How do you save yourself when you're the person you trust least? Dear reader, brace yourself."
—P. J. Vernon, author of Bath Haus and When You Find Me

“After the Lights Go Out is a heartbreaking look at Xavier Wallace’s fight inside the cage and out. John Vercher gives us an unraveling understanding of Xavier’s tumultuous relationship with his white father and Black mother, and the seedy underbelly of fighting. It’s a riveting story where the drama propels you from page to page. All these threads kept me reading, but what kept me most engrossed is that although Xavier is involved in many battles, his most formidable opponent might just be himself. Vercher is a master of interior tension. This book grabs you and doesn’t let go.”
—Crystal Wilkinson, Kentucky’s Poet Laureate and author of Perfect Black and The Birds of Opulence

“John Vercher shares this gripping, tragic tale with great compassion, deftly guiding the reader through the MMA world, the nuances of mixed-race identity, and the questionable allegiances that form when the world forces people to prove their own humanity. Never has winning seemed so bittersweet, and never have I felt so much for such a complicated character.”
—Chris L. Terry, author of Black Card and Zero Fade

“John Vercher’s After the Lights Go Out is a universal story about the grim realities of a savage sport and a savage world. Think Warrior by way of Fat City. It’s poetic, evocative, and charged with passion. It’s full of hope and heartache. Xavier ‘Scarecrow’ Wallace is a character I just can’t shake.”
—William Boyle, author of Shoot the Moonlight Out and City of Margins

“Pulls you into the ring and then breaks your heart.”
—PINJ

“The fight-game story is enough to drive most novels, but this one goes way beyond that. The scenes involving Xavier and his father are agonizing in their soul-shattering horror; the portrait of the Black nursing-home worker who absorbs Sam's abuse is breathtaking in its complexity; and Xavier's internal battle as his brain functions fail him brings home the quintessential noir emotion of powerlessness. This is a difficult novel to read, but there is a deep and sustaining humanity at its core.”
—Booklist, Starred Review

“Vercher (Three-Fifths) strides back in the ring with the explosive story of a troubled Philadelphia MMA fighter whose career has stalled . . . expertly captures the brashness and discipline of combat sports as well as the harsh realities of the fighting life, delivering all of it in a swiftly paced triumph complete with a surprising one-two punch of a conclusion. This is simply brilliant.”
—Publishers Weekly, Starred Review

Praise for Three-Fifths
Nominated for the Edgar, Anthony, and Strand Awards for Best First Novel
Shortlisted for the CWA New Blood Dagger
A Guardian, Sunday Times, and Financial Times Best Crime Novel of the Year
A Chicago Tribune Best Book of the Year

“John Vercher has such love and compassion for his characters . . . I couldn't help but be sucked into their lives from the very first pages. It's so incredibly suspenseful that I was continually surprised by the story and deeply moved by the time I turned the last page."
―Attica Locke

“Compelling and profoundly moving.”
—The Guardian