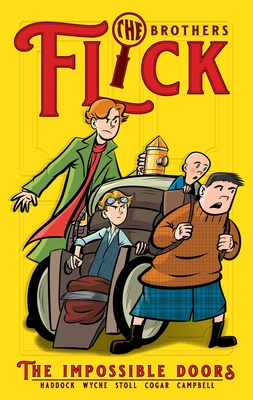 
Usually Arrives to Store in 1-5 Days
Sherlock Holmes meets the Wayside School in this Middle Grade supernatural sleuthing graphic novel about the Flick brothers - four siblings searching for explanations to outbreaks of supernatural strangeness and otherworldly weirdness in their Edwardian-era hometown.

A bump in the night? They're on the case! At Strander House, things are…weird. There’s an ogre wedged in the closet, and you have to be careful not to slip on the leak coming from the ocean in the attic. What’s possibly weirder than the fact that you can walk into the bathroom and end up in next Tuesday are the four brothers who investigate these strange supernatural occurrences…the Brothers Flick! Leo, Desmond, Remy, and Cub seek to get to the bottom of every shadow you swear you saw move. If they happen to stumble upon answers to the mysterious disappearance of their own family along the way, all the better.   For fans of  Lemony Snicket's A Series of Unfortunate Events, Gravity Falls, Whispering Pines, the Hardy Boys, the Winterhouse series, the Greenglass House series, and the Wayside School series!

“… the metaphor of “impossible doors” leading toward unending universes, where even the smallest changes reverberate, provides a unique framework for themes of grief and healing.”   – Publishers Weekly

“… this graphic novel will attract mystery and adventure fans by the droves..."     -- Kirkus

“… a “Jonny Quest meets the Hardy Boys” vibe with a few modern twists…”  -- Kirkus
Ryan Haddock has wanted to write books since he was six years old. Over the years, his career aspirations also included rock star, lawyer, rock star lawyer, and teacher, but writing books never left his heart. Thank goodness someone finally let him write a book.

Ryan resides with his wife and kids in a charmingly quaint city known for its ridiculously fast internet and a jingle about a train.

Nick Wyche lives in the foothills of the Smoky Mountains with his wonderful wife, Suzanne, overlooking the Tennessee River. He has been obsessed with comics and cartoons for over 4 decades and still can't believe he gets to draw professionally.
Hometown/State: Chattanooga, TN
https://www.instagram.com/nickwyche/?hl=en

David Stoll
Dave has an affinity for clear storytelling, dynamic layouts, and childish hijinks, so this was the book for him! He's Denver-based, and can be reached on all social media @stollcomics.
Hometown/State: Denver, CO
https://twitter.com/StollComics
https://www.instagram.com/stollcomics/
http://stollcomics.com/

Whitney Cogar is a freelance illustrator based in Savannah, GA. Her specialty is sequential art - whether it's comics or storyboards, she excels in creating clear visual narrative work.

Jim Campbell is a twice-Eisner-nominated comic-book letterer, one-time writer (perhaps again in the future!) and occasional artist (although his enthusiasm rather outstrips his actual ability). He knows more about print production than mortal man was meant to know and has also scanned more images than you've had hot dinners. Unless you're ninety years old.
Hometown:Nottingham, United Kingdom
http://clintflickerlettering.blogspot.com/
https://twitter.com/CampbellLetters
“… this graphic novel will attract mystery and adventure fans by the droves …”
— Kirkus

“… the metaphor of “impossible doors” leading toward unending universes, where even the smallest changes reverberate, provides a unique framework for themes of grief and healing.”
— Publishers Weekly