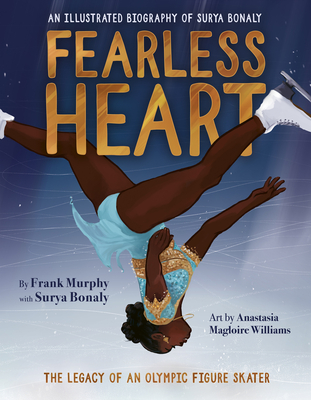 
Usually Arrives to Store in 1-5 Days
A vibrant picture book biography of Surya Bonaly, the figure skating champion who backflipped her way into history

As a young girl in France, Surya Bonaly was constantly in motion, gifted in any sport she tried. But it was figure skating that had her heart. Surya knew she belonged on the ice.

Her colorful costumes, exuberant routines, powerful jumps, and daring combinations were all expressions of her love for skating and her ambition to push the boundaries of what a figure skating champion could look like.

Some people weren't sure Surya belonged on top of the podium. "Is she graceful enough?" they asked. "Does she look like a skater?"

But Surya's fearless heart propelled her to always stay true to herself while pursuing her boldest dreams.

Culminating in her iconic backflip performed at the 1998 Olympics, Fearless Heart is a lushly illustrated, lyrical story of self-expression and courage.
Surya Bonaly is a retired figure skater. She is a three-time World silver medalist, a five-time European champion, and a nine-time French national champion. Bonaly lives in Las Vegas, NV, where she is a coach.

Frank Murphy is a writer and teacher. He is the author of A Boy Like You, A Girl Like You, and A Teacher Like You, in addition to many historical biographies for early readers.

Anastasia Magloire Williams is an illustrator and graphic designer based in Atlanta.