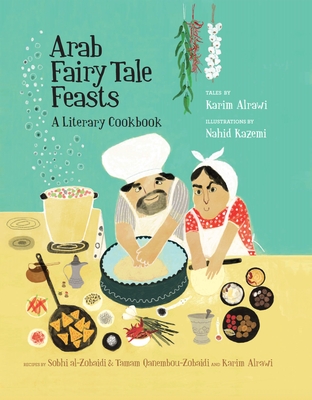 
Email or call for availability
An entertaining, multifaceted, and delicious way to explore Arab culture

Award-winning writer and storyteller, Karim Alrawi, draws on his deep knowledge of Arab culture to create original stories that are a feast for young imaginations. Told with intriguing details, the tales take young readers on a delicious cultural journey and invite them to consider an Arab perspective. Each tale symbolically incorporates food and concludes with a traditional recipe, lovingly flavored with colorful folkloric illustrations, making this a literary banquet to savor with family and friends across generations time and again.

This charming, whimsical, and beautifully illustrated book will capture children’s fancy and will be enjoyed by the whole family.

Karim Alrawi was born in Alexandria, Egypt. He went to school in England and after graduation he worked as a writer at several theaters including the Royal Court Theatre and the Theatre Royal Stratford East. Returning to Egypt he taught in the theater department of the American University in Cairo. He wrote four stage plays in Arabic that were produced on the Egyptian stage. His first novel Book of Sands won the inaugural HarperCollins/UBC Prize for Best New Fiction. He is the author of several picture books for children, including The Mouse Who Saved Egypt and The Girl Who Lost Her Smile.

Nahid Kazemi is an artist, illustrator and graphic designer. She has published many award-winning children’s books, and was nominated for the Canadian Governor General’s Award and the 2020 Astrid Lindgren Memorial Award. Her recent publications include Over the Rooftops, Under the Moon and The Old Woman. She has exhibited her work around the world. Nahid lives in Montreal.
“A fun book for family sharing.”

“More than just a storybook, more than just a cookbook, this … series promises to bring people together to share food and stories, embodying the spirit of generosity of the tales within.”

“A must-read book … Children’s books are known for a lot of things, but teaching kids how to cook is not one of them. And yet, after reading Karim Alrawi’s book, Arab Fairy Tale Feasts, one wonders, why not? Written by Alrawi in simple, approachable language and with obvious affection and tenderness for his culture, this book includes folk tales that immerse the reader and urge them to consider the Arab perspective. Each story is about food, feasting, and Arab culinary traditions, and concludes with a recipe for a traditional favorite dish, such as mamoul (date-filled cookies), shish taouk (chicken kebab), manakish zaatar (zaatar flatbread), and more. Arab Fairy Tale Feasts is part of a series of children’s books that celebrates the cuisines of different cultures with kid-friendly recipes and heartwarming anecdotes. Grades 4-7.”
— Vancouver Writers Festival

“This reading-and-feasting anthology, a combination of stories and recipes, makes a unique addition to the literary landscape for both children and their adults … This book is well-pitched at young readers, with short, tightly plotted stories and related fun facts; the sort of book a child can read and re-read … The stories are fun and irreverent, with the tricksters, widows, and young children generally winning out over the stiff, the stodgy, and the greedy … the stories are updated to feel both timeless and contemporary. They take their young readers on a quick tour of different cities and landscapes, full of bright children, silly adults, and feasts fit for a hungry young reader. As well as being an excellent gift and keepsake, the book is also a very handy kitchen resource. In the end, it’s hard to know whether this collection should be kept in the kitchen or on a child’s bedroom bookshelf.”
— Marcia Lynx Qualey, Middle East Eye

“From a miser in Egypt who spills his lentil soup and loses his fortune while dreaming of great riches to a young woman in Algeria who cleverly catches the thief who stole her wheat for couscous, this volume in the Fairy Tale Feasts series uses short Arabic folktales and fairy tales to present traditional foods from the Middle East and North Africa. Each story is followed by one or two related recipes with an explanatory note about the dish’s popularity in Arabic culture and sidebars that offer more information about the featured food, such as the Arabic origin of the English word apricot and the fruit’s special use as a drink during the season of Eid. For readers unfamiliar with the Arab world, a useful introduction describes where Arab people live, their shared Arabic language, the golden age of Arab cookbooks, and the influence of Arab cuisine on other parts of the world (e.g., the Spanish dish paella has Arabic roots). Fitting illustrations in a folk-art style add more flavor to this savory, multipurpose collection.”
— Booklist

“A delicious series of original stories that shares Arabic culture with young readers as each story not only takes them on a mouth-watering journey but includes a traditional recipe.”
— The Globe & Mail

“An engaging literary cookbook that is a feast for the eyes, the heart, and the palate. This charming third installment in the Fairy Tale Feasts Collection turns to the Middle East and North Africa … Each story incorporates alimentary motifs and themes and is followed by a complementary recipe from the Arab world … The recipes—most of which require easily obtainable ingredients—are uncomplicated … [And] there is much to be learned, even for readers familiar with Arab culture. Both stories and recipes are enhanced with folk art–style illustrations that add a traditional feel.”
— Kirkus Reviews

“This book serves as a gesture of hospitality to those who want to begin to develop an appreciation of Arab culture. Read the stories and make the meals, but be sure to share both with your family or friends, or most importantly of all, with strangers. Highly Recommended.”
— CM: Canadian Review of Materials