Legends of the Mahasiddhas: Lives of the Tantric Masters (Paperback) 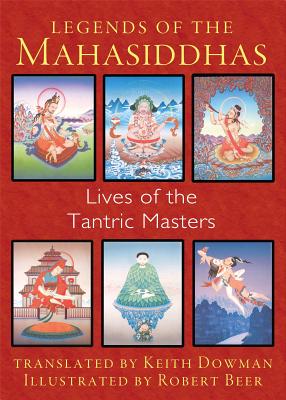 Legends of the Mahasiddhas: Lives of the Tantric Masters (Paperback)


Usually Arrives to Store in 1-5 Days
A richly illustrated collection of stories about the mahasiddhas, spiritual adventurers who attained enlightenment and magical powers by disregarding convention

• Recounts stories of enlightened masters from all walks of life, including a washerman, a thief, a conman, a gambler, and a whore, and the magical and “crazy” deeds of each, such as walking through walls, flying, talking with birds, and turning people to stone

Offering a modern translation of “The Legends of the Eighty-four Mahasiddhas,” a 12th-century Tibetan text, translator Keith Dowman shares stories of the spiritual adventurers, rebellious saints, and enlightened tantric masters of ancient India known as “siddhas.” He shows how the mahasiddhas arose from the grassroots of society and represented an entire spectrum of human experience. Counted among the greatest of the siddhas are a washerman, a cowboy, a thief, a conman, a gambler, and a whore, all extraordinary men and women who attained the goal of their meditations, as well as enlightenment and magical powers, by disregarding convention and penetrating to the core of life.

Recounting the magical and “crazy” deeds of the mahasiddhas, such as walking through walls, flying, talking with birds, and turning people to stone, Dowman reveals the human qualities of the tantric masters and the vital elements of the siddhas’ philosophy of nonduality and emptiness. Richly illustrated with paintings of the tantric saints by artist Robert Beer, these stories of the mahasiddhas show us a way through human suffering into a spontaneous and free state of oneness with the divine.
Keith Dowman has spent 30 years traveling widely in India and Nepal and is an initiate of the Nyingmapa school of Tibetan Buddhism. He is the author of The Divine Madman and Power Places of Kathmandu.

Robert Beer studied Tibetan thangka painting in India and Nepal with Khamtrul Rinpoche, the greatest living thangka painter of his time, and with Jampa-la, the state painter of Tibet. He currently lives with his family in Oxford.
“Robert Beer is a master. His own story of being rescued by Tibetan art is almost as amazing as the stories of the Mahasiddhas.”
— Frank Olinsky, Tricycle Magazine

"These are extraordinary, riveting tales. . . a book of high merit and high adventure, a marvel of inspired creation. . . stories through whose cosmic transparency shines the illimitable Buddha-nature."
— Small Press