Born for Trouble: The Further Adventures of Hap and Leonard (Paperback) 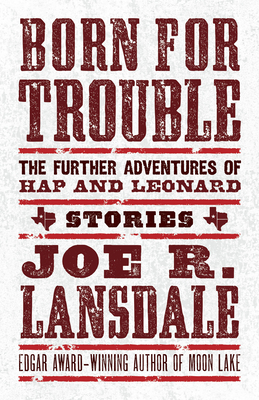 Born for Trouble: The Further Adventures of Hap and Leonard (Paperback)


Usually Arrives to Store in 1-5 Days
In Edgar Award winner Joe R. Lansdale's newest Hap and Leonard story collection, the boys are back with more righteous ass-kickings, highly improbable adventures, and disastrous fishing trips. These never before collected tales showcase the popular not-so dynamic duo who are little bit older, but not a whole lot wiser--Hap and Leonard were truly born for trouble. "You could call Born for Trouble a collection of stories. But that's like calling Paradise Lost by Milton a poem. Born for Trouble is a road map through 20th-century crime fiction."
--S.A. Cosby author of Razorblade Tears " Lansdale] has a folklorist's eye for telling detail and a front-porch raconteur's sense of pace."
--New York Times Book Review When you meet him, Hap Collins seems like just a good ol' boy. But even in his misspent youth, his best pal was Leonard Pine: black, gay, and the ultimate outsider. Together, they have sort of found their way as partners in crime-solving--and at least as often, as hired muscle. As Hap wrestles with his new identity as a husband and father, and Leonard finds love in a long-term relationship, the boys continue their crime-solving shenanigans. They grapple with a stolen stuffed dog, uncover the sordid secret of a missing bookmobile, compete in a warped version of the Most Dangerous Game, regroup after Hap's visit to the psychologist goes terribly awry, and much more. So sit yourself back and settle in--Born for the Trouble is East Texas mayhem as only the master mojo storyteller Lansdale could possibly tell. About the Hap and Leonard short story series Hap and Leonard
Hap and Leonard: Blood and Lemonade
The Big Book of Hap and Leonard (digital only)
Of Mice and Minestrone The classic Hap Collins and Leonard Pine mystery series began in in 1990 with Savage Season. Hap and Leonard made their screen debuts in the three season Hap and Leonard TV series, starring Michael K. Williams (The Wire), James Purefoy (The Following), and Christina Hendricks (Mad Men).
Joe R. Lansdale is the internationally-bestselling author of over fifty novels, including the popular, long-running Hap and Leonard series. Many of his cult classics have been adapted for television and film, most famously the films Bubba Ho-Tep and Cold in July, and the Hap and Leonard series on Sundance TV and Netflix. Lansdale has written numerous screenplays and teleplays, including the iconic Batman the Animated Series. He has won an Edgar Award for The Bottoms, ten Stoker Awards, and has been designated a World Horror Grandmaster. Lansdale, like many of his characters, lives in East Texas.