The Story of the Universe in 100 Stars (Hardcover) 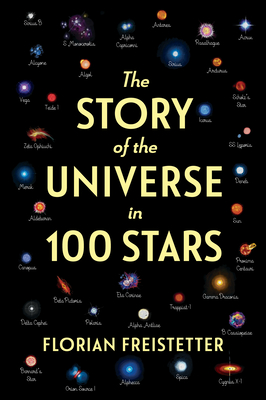 The Story of the Universe in 100 Stars (Hardcover)


Usually Arrives to Store in 1-5 Days
These 100 amazing stars shine a light on astronomy’s greatest hits and their enduring impact on our culture.

With roughly 100 billion stars in the Milky Way alone, the cosmos is simply too vast for an unabridged tell-all. But here’s the next best thing: 100 stars—bright and faint, near and far, famous and obscure, long dead and as-yet unborn, red, yellow, blue, and white (but, as you’ll learn, never green)—handpicked by astronomer Florian Freistetter because they have the very best stories to tell:
Freistetter’s short, easy-to-read profiles not only invite you to gaze into the past and future of the universe, they introduce a stellar cast of scientists who came before: from Annie Jump Cannon, who revolutionized how we classify the stars, to Dorrit Hoffleit, who first counted them. Enjoy your journey through the cosmos. . . .
Florian Freistetter is an astronomer, author, columnist, blog­ger, and podcaster. Born in 1977, he studied astronomy at the University of Vienna. In 2008, he launched the astronomy blog Astrodicticum Simplex, one of the most widely read science blogs in German. His podcast, Sternengeschichten (“Star Stories”), is one of the most successful German-language science podcasts. His books include Der Komet im Cocktailglass (“The Comet in a Cocktail Glass,” 2013), which was awarded the Austrian Science Book of the Year prize in 2014; Isaac Newton: The Asshole Who Reinvented the Universe; and most recently, Stephen Hawking: His Science in a Nutshell, among many others. In 2015, he became a permanent member of the Austrian “scientific cabaret,” Science Busters. In 2013, the asteroid 2007 HT3 was officially desig­nated 243073 Freistetter by the Minor Planet Center of the International Astronomical Union.
2021 Foreward Indies Finalist

“This book’s modest price makes it useful for public libraries and amateur stargazers who want to learn more about some key stars and their contribution to knowledge of the universe. . . . Recommended.”—Choice reviews