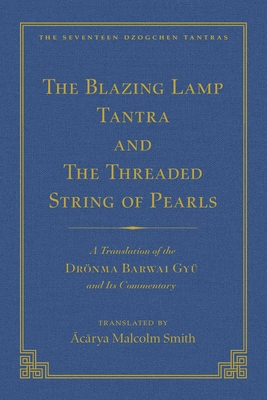 By Malcolm Smith (Translated by)


Email or call for price
New translations two of the most revered and important tantric texts in Tibetan Buddhism, essential for meditators, scholars, and students alike.

“If one knows the Self-Arisen Vidya Tantra, the Self-Liberated Vidya Tantra, and the Tantra Without Syllables, one will have command over the general meaning of the tantras, like a king who has command over his subjects.”—Treasury of the Supreme Vehicle

The eleventh-century Seventeen Tantras are among the most important texts in the tradition of the Great Perfection—and in all of Tibetan Buddhism.

The Tantra Without Syllables focuses on the theoretical basis for trekchö, and the Blazing Lamp focuses on the theoretical basis of thögal. The actual tantra discussed is not the body of the root text of the tantra, but rather the subject matter that the root text points to: the continuum of one’s own vidya, personal knowledge of one's true condition, confirmed in a direct perception, which cannot be explained in words.

Malcolm Smith’s simple and lucid introductions bring clarity to an intricate subject, making these volumes vital reading for any student of Dzogchen.
Malcolm Smith is a graduate of the Shang Shung Institute’s School of Tibetan Medicine (2009) and has been a student of Chogyal Namkhai Norbu since 1992. He is a veteran of a traditional three-year solitary Tibetan Buddhist retreat, a published translator of Tibetan Buddhist texts (in Treasures of the Sakya Lineage, Shambhala, 2008), and was awarded the acarya degree by the Sakya Institute for Buddhist Studies in 2004. He has worked on translations for renowned lamas since 1992, including His Holiness Sakya Trichen, Kunzang Dechen Lingpa, Lama Migmar Tseten, Khenpo Konchog Gyaltsen and many other lamas.

He’s the translator of Buddhahood in This Life and The Self-Arisen Vidya Tantra and the Self-Liberated Vidya Tantra.