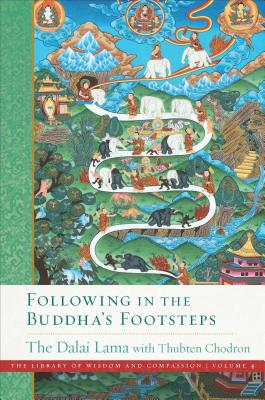 By His Holiness the Dalai Lama, Thubten Chodron

This is book number 4 in the The Library of Wisdom and Compassion series.

The newest volume in the bestselling series from the Dalai Lama.

Delve into the substance of spiritual practice in this fourth volume of the Dalai Lama’s definitive series on the path to awakening, Following in the Buddha’s Footsteps. You’ll first hear His Holiness’s explanation of the Buddha, Dharma, and Sangha, why they are reliable guides on the path, and how to relate to them. His Holiness then describes the three essential trainings common to all Buddhist traditions: the higher trainings in ethical conduct, concentration, and wisdom. These chapters show us how to live a life free of harm to self or others and give us detailed instructions on how to develop single-pointed concentration as well as the higher states of concentration available to an earnest practitioner. In addition, the chapters on wisdom contain in-depth teachings on the noble eightfold path and the four establishments of mindfulness for developing greater awareness and understanding of our body, feelings, mind, and other phenomena. Together, these topics form the core of Buddhist practice.

This is a book to treasure and refer to repeatedly as you begin the path, progress on it, and near the final goal of nirvana.
His Holiness the Dalai Lama is the spiritual leader of the Tibetan people, a Nobel Peace Prize recipient, and a beacon of inspiration for Buddhists and non-Buddhists alike. He has persistently reached out across religious and political lines and has engaged in dialogue with scientists in his mission to advance peace and understanding in the world. In doing so, he embodies his motto, “My religion is kindness.”

Thubten Chodron has been a Buddhist nun since 1977. A graduate of UCLA, she is the founder and abbess of Sravasti Abbey in Washington State. She is a popular speaker and author of numerous books, including Buddhism for Beginners.
“This authoritative volume serves as a rich source of information on two major themes—the bases of Buddhist faith and the framework of Buddhist training—each viewed from the two complementary perspectives of the Pali tradition and the Indo-Tibetan tradition.”
— Bhikkhu Bodhi, scholar-monk and translator of Pali texts

“Following in the Buddha’s Footsteps clearly lays out how to take the journey to exploring and developing our mind’s highest potential, following the Buddha as the unmistaken qualified guide who discovered the unmistaken qualified path all the way up to the final destination: enlightenment. The chapters in this book are logical, historically accurate, in-depth instructions and directions on how to skillfully and diligently create a meaningful Dharma practice.”
— Jetsunma Tenzin Palmo, founding abbess of Dongyu Gatsal Ling Nunnery

“His Holiness the Dalai Lama and Ven. Thubten Chodron continue to give generously to the Buddhist community, and in particular to the community of Western Buddhist practitioners. This fourth volume in the magnificent Library of Wisdom and Compassion maintains the high standards set in the first three: it is comprehensive without sacrificing relevant detail, it is precise without sacrificing accessibility, and it is of enormous value to practitioners and teachers but still of great interest to scholars of Buddhism.”
— Jay L. Garfield, Doris Silbert Professor in the Humanities, Smith College and the Harvard Divinity School