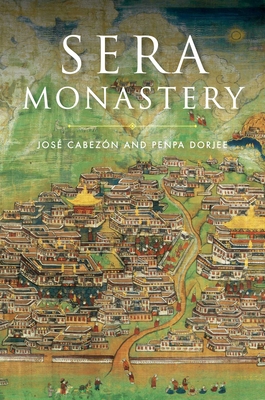 
Email or call for price
The definitive history of Sera Monastery, one of the great monastic universities of Tibet, from its founding to the present.

Founded in 1419, Sera Monastery was one of the three densas, the great seats of learning of the Geluk school of Tibetan Buddhism. With over 9,000 monks in residence in 1959, it was the second largest monastery in the world. Throughout its history, Sera has produced some of Tibet’s most important saints, scholars, and political leaders.

The scholars José Cabezón and Penpa Dorjee begin Sera Monastery with the history of monasticism from the time of the Buddha through its early development in Tibet and then tell the 600-year story of Sera from its founding to the present. They recount how the monastery grew and evolved during the centuries, how it has fared under Chinese rule, and how it was transplanted in the Tibetan refugee camps of South India. We are introduced to some of Sera’s most important lamas and hermits, as well as its curriculum, yearly calendar, the daily life of scholar monks, and the role Sera monks played in the political history of Tibet.

Former Sera monks themselves, Cabezón and Dorjee demonstrate their firsthand knowledge of the monastery, its traditions, and daily life on every page. Scrupulously researched over decades, Sera Monastery is the most comprehensive history of a Tibetan monastery ever written in a Western language.
José Ignacio Cabezón is Distinguished Professor of Religious Studies and XIVth Dalai Lama Professor at the University of California, Santa Barbara. He is the author or editor of a dozen books and many more articles on various aspects of Tibetan religion and religious studies, with research interests as diverse as Madhyamaka philosophy, Buddhism and sexuality, classical South Asian political ethics, and Tibetan ritual.