The Life of My Teacher: A Biography of Kyabjé Ling Rinpoché (Paperback) 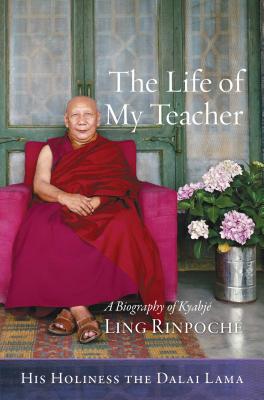 The Life of My Teacher: A Biography of Kyabjé Ling Rinpoché (Paperback)

By His Holiness the Dalai Lama, Gavin Kilty (Translated by), Thupten Jinpa (Introduction by)


Email or call for price
The Dalai Lama tells the life story of his remarkable teacher, Ling Rinpoché, who remained a powerful anchor for him from childhood and into his emergence as a global spiritual leader.

The Sixth Ling Rinpoché (1903–83) was a towering figure in Tibetan Buddhism. Combining great learning with great humility, he was ordained by the Thirteenth Dalai Lama and went on to serve as the head of the Geluk tradition and as the senior tutor to the present Dalai Lama. In temperament and wisdom, he had a profound influence on the Dalai Lama’s spiritual development, and he became a steadying presence for His Holiness during the chaotic changes that defined the Tibetan experience of the twentieth century, with the invasion of their county by Communist forces and the subsequent rebuilding of their culture in India. Ling Rinpoché’s extensive travels among exiled communities abroad and across India buoyed the spirits of the Tibetan diaspora, and the training and activities of this consummate Buddhist master, here told by the Dalai Lama in the traditional Tibetan style, will inspire and amaze.

Over one hundred archival photos bring the text to life.
Gavin Kilty has been a full-time translator for the Institute of Tibetan Classics since 2001. Before that he lived in Dharamsala, India, for fourteen years, where he spent eight years training in the traditional Geluk monastic curriculum through the medium of class and debate at the Institute of Buddhist Dialectics. He has also received commissions to translate for other institutions, such as the Foundation for the Preservation of Mahayana Teachings, Tibet House Germany, The Gelug International Foundation, and Tsadra Foundation.

Thupten Jinpa was educated in the classical Tibetan monastic academia and received the highest academic degree of geshe lharam (equivalent to a doctorate in divinity). Jinpa also holds a BA in philosophy and a PhD in religious studies, both from the University of Cambridge, England. Since 1985 he has been the principal translator to the Dalai Lama, accompanying him to the United States, Canada, and Europe. He has translated and edited many books by the Dalai Lama, including The World of Tibetan Buddhism, Essence of the Heart Sutra, and the New York Times bestseller Ethics for the New Millennium.

Jinpa has published scholarly articles on various aspects of Tibetan culture, Buddhism, and philosophy, and books such as Songs of Spiritual Experience (co-authored) and Self, Reality and Reason in Tibetan Philosophy. He serves on the advisory board of numerous educational and cultural organizations in North America, Europe, and India. He is currently the president and the general series editor of the Institute of Tibetan Classics, a nonprofit educational organization dedicated to translating key Tibetan classics into contemporary languages. And he also currently chairs the Mind & Life Institute and Compassion Institute.