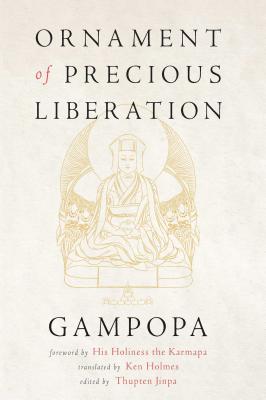 
Email or call for price
A welcome new translation of Gampopa's classic overview of the Buddha's teachings.

Discover the heart of the Buddha’s teachings in this new and beautiful translation of Gampopa’s classic guidebook.

Ornament of Precious Liberation is a spiritual and literary treasure of Tibetan Buddhism and of the Kagyü lineage in particular. Laying out step-by-step the path to buddhahood that is open to us all, to read Gampopa’s text is like receiving the teachings directly from the master himself. It is a quintessential guide to enlightenment that students will return to again and again for its insights into living an awakened life.
Thupten Jinpa was educated in the classical Tibetan monastic academia and received the highest academic degree of geshe lharam (equivalent to a doctorate in divinity). Jinpa also holds a BA in philosophy and a PhD in religious studies, both from the University of Cambridge, England. Since 1985 he has been the principal translator to the Dalai Lama, accompanying him to the United States, Canada, and Europe. He has translated and edited many books by the Dalai Lama, including The World of Tibetan Buddhism, Essence of the Heart Sutra, and the New York Times bestseller Ethics for the New Millennium.

Jinpa has published scholarly articles on various aspects of Tibetan culture, Buddhism, and philosophy, and books such as Songs of Spiritual Experience (co-authored) and Self, Reality and Reason in Tibetan Philosophy. He serves on the advisory board of numerous educational and cultural organizations in North America, Europe, and India. He is currently the president and the general series editor of the Institute of Tibetan Classics, a nonprofit educational organization dedicated to translating key Tibetan classics into contemporary languages. And he also currently chairs the Mind & Life Institute and Compassion Institute.
“Though there are several earlier translations of Ornament of Precious Liberation, this translation is the most readable and faithful, and the extensive footnotes will be of help to practitioners and scholars alike.”
— The Seventeenth Karmapa, Ogyen Trinley Dorje

“A classic work on the spiritual path, brought to life in for contemporary English readers in this lively new translation. This is among the clearest explanations of the Mahayana path in any language.”
— Kurtis R. Schaeffer, University of Virginia

“The Ornament of Precious Liberation by the dharma lord Gampopa is not only an authoritative and comprehensive blueprint of Buddhist spirituality, it is also a classic of world literature. Ken Holmes’s beautiful new translation will help ensure that these much needed guidelines of Gampopa for developing wisdom and compassion will receive timely new attention in our shared experience of the 21st century.”
— Dzogchen Ponlop Rinpoche