Song of the Road: The Poetic Travel Journal of Tsarchen Losal Gyatso (Hardcover) 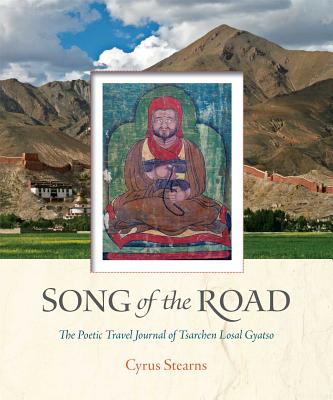 Song of the Road: The Poetic Travel Journal of Tsarchen Losal Gyatso (Hardcover)

By Cyrus Stearns (Translated by)


Email or call for price
In Song of the Road, Tsarchen Losal Gyatso (1502-66), a tantric master of the Sakya tradition of Tibetan Buddhism, weaves ecstatic poetry, song, and accounts of visionary experiences into a record of pilgrimage to central Tibet. Translated for the first time here, Tsarchen's work, a favorite of the Fifth Dalai Lama, brims with striking descriptions of encounters with the divine as well as lyrical portraits of Tibetan landscape. The literary flights of Song of the Road are anchored by Tsarchen's candid observations on the social and political climate of his day, including a rare example in Tibetan literature of open critique of religious power.

Like the Japanese master Basho's famous Narrow Road to the Interior, written 150 years later, Tsarchen's travelogue contains a mixture of luminous prose and verse, rich with allusions. Traveling on horseback with a band of companions, Tsarchen visited some of the most renowned holy sites of the Tsang region, incluing Jonang, Tropu, Ngor, Shalu, and Gyantse. In his introduction and copious notes, Cyrus Stearns unearths the layers of meaning concealed in the text, excavating the history, legends, and lore associated with people and places encountered on the pilgrimage, revealing the spiritual as well as geographical topography of Tsarchen's journey.
Cyrus Stearns has been a student of Tibetan Buddhism since 1973. His main teachers have been Dezhung Tulku Rinpoché, Chogyé Trichen Rinpoché, and Dilgo Khyentsé Rinpoché. He received a PhD in Buddhist studies from the University of Washington and has published several books about the Lamdré tradition and other topics. He is an independent scholar and translator living in the woods on Whidbey Island, north of Seattle, Washington.
"Over the history of Tibetan Buddhism, travel across mountain and plain has long provided an occasion for profound reflections on more spiritual paths. Such reflections abound in Song of the Road. Readers of both English and Tibetan owe a great debt to the renowned translator Cyrus Stearns for bringing this almost forgotten work to the audience it so richly deserves."
— Donald Lopez, Chair, Department of Asian Languages and Cultures, University of Michigan

"Cyrus Stearns's Song of the Road is a rare gem shining light on the life of the remarkable Tibetan master Tsarchen Losal Gyatso. This beautiful rendering of Tsarchen's autobiography captures, with such freshness, the immediacy and profound insight that characterize the Tibetan master's spiritual journey."
— Thupten Jinpa, Institute of Tibetan Classics