Awakening from the Daydream: Reimagining the Buddha's Wheel of Life (Paperback) 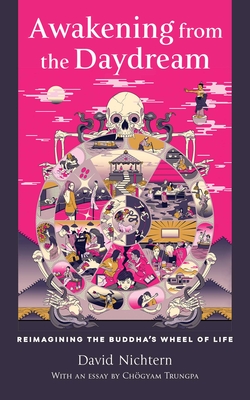 Awakening from the Daydream: Reimagining the Buddha's Wheel of Life (Paperback)


Usually Arrives to Store in 1-5 Days
Hell realms, gods, and hungry ghosts--these are just a few of the images on the Buddhist wheel of life. In Awakening from the Daydream, discover how these ancient symbols are still relevant to our modern life. In Awakening from the Daydream, meditation teacher David Nichtern reimagines the ancient Buddhist allegory of the Wheel of Life. Famously painted at the entryway to Buddhist monasteries, the Wheel of Life encapsulates the entirety of the human situation. In the image of the Wheel we find a teaching about how to make sense of life and how to find peace within an uncertain world. Nichtern writes with clarity and humor, speaking to our contemporary society and its concerns and providing simple practical steps for building a mindful, compassionate, and liberating approach to living.
David Nichtern is a senior teacher in the Shambhala Buddhist lineage of Chogyam Trungpa Rinpoche and Sakyong Mipham Rinpoche. David was one of the initial American students of renowned meditation master Trungpa Rinpoche and studied closely with him soon after his arrival in the United States in 1970. David has been co-director of the Shambhala Meditation Center of Los Angeles and Karme Choling meditation center in Vermont, as well as Director of Expansion for Shambhala Training International and Director of Buddhist Practice and Study for OM yoga. His work has been featured at The Huffington Post, and he leads meditation workshops around the world and online. He has several online meditation workshops available through creativeLIVE.com. His DVD/CD package OM YOGA & MEDITATION WORKSHOP, created in conjunction with yoga teacher Cyndi Lee, is widely available David Nichtern is also a well known composer, producer and guitarist. A four-time Emmy winner and a two-time Grammy nominee, he is the founder of Dharma Moon and 5 Points Records. David has recorded and played with Stevie Wonder, Jerry Garcia, Lana Del Rey, Maria Muldaur, Paul Simon and many others. Among his many credits in records, film and tv, are the classic song "Midnight at the Oasis" and the score for Christopher Guest's film The Big Picture. As the Beyman Bros, he collaborated with Guest and CJ Vanston on an album Memories of Summer as a Child and has produced multiple records for Grammy nominated kirtan performer Krishna Das.