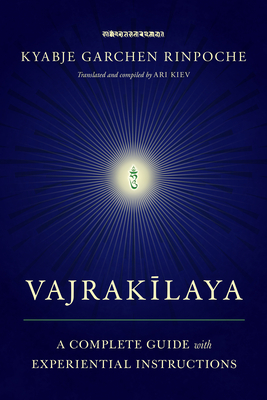 
Usually Arrives to Store in 1-5 Days
A thorough guide to Vajrakīlaya, from a master of the Drigung Kagyu lineage.

In Kyabje Garchen Rinpoche’s first major collection of tantric teachings, he offers a complete manual for the visualization and supplication of the deity Vajrakīlaya. This ancient tantric practice centers on familiarizing oneself with the wrathful deity as a method for traversing the path to enlightenment. With clear instructions and insightful commentary, Garchen Rinpoche highlights the cultivation of bodhicitta at every stage of the path. This comprehensive guide to deity practice by one of the greatest living Tibetan meditation masters will support practitioners of all experiential levels in reuniting with their own awakened nature.
KYABJE GARCHEN RINPOCHE is a Buddhist teacher of the Drigung Kagyu lineage who came of age during the final years of Tibetan sovereignty. When his three-year retreat was close to completion, eminent invasion by the Communist Chinese disrupted his trainings, and he briefly transitioned from solitary retreat to a life as a guerrilla fighter defending his people. Eventually, he was captured and sent to a labor camp, where he was imprisoned for twenty years. During that time, he became a disciple of Kathok Khenpo Münsel Rinpoche and studied with other Vajrayāna masters who were also imprisoned there.

Finally, in 1980 Rinpoche was freed and able to return to the Nangchen area, where he rebuilt his monastery, offering vows at a time when many were afraid to spread Dharma teachings publicly. In 1993, he visited Nepal and India, which eventually led him to the United States, where he settled in 1999. Thereafter, he toured extensively, establishing Dharma centers throughout the world, while also building temples, housing for monks and nuns, schools, and medical facilities in Eastern Tibet. Rinpoche retired from touring in 2019 and currently resides in Chino Valley, Arizona.
“This is the first complete overview of the foundational view, practices, and liturgies associated with the Buddhist deity Vajrakīlaya. Kyabje Garchen Rinpoche, a highly realized Dharma teacher and guide to countless disciples throughout the world, has provided a supreme resource for guiding beings to enlightenment. I rejoice in this valuable contribution to the spreading of the Buddhadharma throughout the world, which will benefit many beings.”—His Holiness the Drikung Kyabgon Chetsang Rinpoche