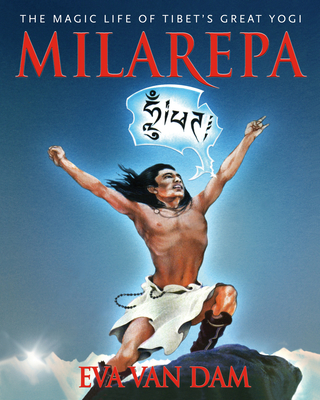 
Email or call for price
The legendary exploits of a spiritual superhero, and Tibetan Buddhism's most renowned saint--in a full-color graphic novel.

From avenging evil sorcerer to devoted Buddhist ascetic to enlightened being—the story of Milarepa’s spectacular life is a powerful testimony to self-knowledge, transformation, and liberation.
It is the year 1050, and Milarepa is seeking vengeance on unscrupulous relatives for mistreating his mother and sister. Trained in dark magic, he commands a rain of scorpions, snakes, and lizards to attack the villains. But when his teacher rebukes him for his odious deeds, Milarepa renounces witchcraft to seek mystical truth. He retreats to a cave where, after years of intense meditation, he acquires the power to shape-shift. But most importantly he achieves the greatest victory of all—mastery over himself.
Eva van Dam is a Dutch artist and illustrator based in Amsterdam, whose work has appeared in several Buddhism-related books. She has traveled extensively in Tibet and lived for several years in Nepal, where she studied the iconography of Tibetan religious art.
“The life of Milarepa has inspired many generations of Buddhist practitioners. Eva Van Dam’s powerful and creative rendering in images of the great Tibetan yogi’s story reaches an even wider audience, encouraging readers of all ages to set on the path of liberation, wisdom, and compassion.”—Matthieu Ricard, author of Enlightened Vagabond