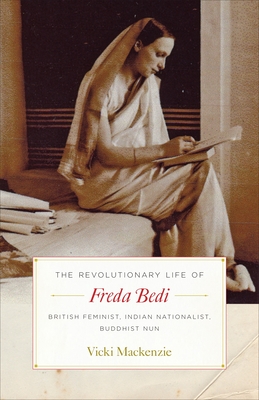 
Email or call for price
A fascinating biography of Freda Bedi, an English woman who broke all the rules of gender, race, and religious background to become both a revolutionary in the fight for Indian independence and then a Buddhist icon.

She was the first Western woman to become a Tibetan Buddhist nun—but that pioneering ordination was really just one in a life full of revolutionary acts. Freda Bedi (1911–1977) broke the rules of gender, race, and religion—in many cases before it was thought that the rules were ready to be challenged. She was at various times a force in the struggle for Indian independence, spiritual seeker, scholar, professor, journalist, author, social worker, wife, and mother of four children. She counted among her friends, colleagues, and teachers Mohandas Gandhi, Jawaharlal Nehru, Indira Gandhi, the Dalai Lama, Chögyam Trungpa Rinpoche, and many others. She was a woman of spiritual focus and compassion who was also not without contradictions. Vicki Mackenzie gives a nuanced view of Bedi and of the forces that shaped and motivated this complex and compelling figure.
Vicki Mackenzie is a British journalist who has written for the national and international press for over forty years. Her articles have appeared in The Sunday Times, The Observer, The Daily- and Sunday Telegraph, the Daily Mail, and many magazines. She has been studying and practicing Buddhism since 1976, and is the author of Cave in the Snow.
“This book is a worthy record of a truly fascinating woman.”—Diana Athill, author of Somewhere Towards the End, Stet: An Editor’s Life, and Alive, Alive Oh!

“An inspiring biography that will appeal to Buddhists and non-Buddhists alike.”—David Michie, author of Buddhism for Busy People

“Vicki Mackenzie captures the spirit of Freda Bedi, whose fierce compassion guided her through the shoals of political activism, motherhood, and finally bringing Buddhism to the West.”—Wendy Garling, author, Stars at Dawn: Forgotten Stories of Women in the Buddha’s Life

“An enthralling story about an indomitable woman, who cared deeply about the suffering and inequalities of the world—and did something about them. Freda Bedi was a big woman, with a big heart and a big life.”—Joanna Lumley

“Vicki Mackenzie has written an engrossing and dramatic account of an extraordinary spiritual adventurer who lived the equivalent of four or five lifetimes all packed into one! As she did with Cave in the Snow: A Western Woman's Quest for Enlightenment, the stellar biography of Tenzin Palmo, the second Western woman to become a Tibetan Buddhist nun, Mackenzie stirs our souls by giving us a vivid portrait of a disciplined and dedicated life.”—Spirituality & Practice