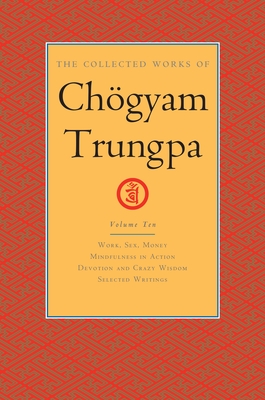 This is book number 10 in the The Collected Works of Chögyam Trungpa series.


The Collected Works of Chögyam Trungpa brings together in ten volumes the writings of one of the first and most influential and inspirational Tibetan teachers to present Buddhism in the West. Organized by theme, the collection includes full-length books as well as articles, seminar transcripts, poems, plays, and interviews, many of which have never before been available in book form. From memoirs of his escape from Chinese-occupied Tibet to insightful discussions of psychology, mind, and meditation; from original verse and calligraphy to the esoteric lore of tantric Buddhism—the impressive range of Trungpa’s vision, talents, and teachings is showcased in this landmark series.

Volume Ten begins with Chögyam Trungpa’s three most recent books: Work, Sex, Money, Mindfulness in Action, and Devotion and Crazy Wisdom. The first two books in the volume emphasize the importance of meditation in action and bringing awareness, mindfulness, intentionality, and a sense of the sacred into everyday life. The third book explores devotion and discusses mutual commitment and surrendering between teacher and student. The selected writings in this volume range from older articles originally published in the Vajradhatu Sun to recently edited articles, including several that have not yet appeared in print. Overall, these articles  show us how Trungpa Rinpoche worked deeply and directly with many interest groups and subsections of the community, and how he infused each situation with dharma, taking every opportunity to present essential teachings.
CHÖGYAM TRUNGPA (1940-1987)--meditation master, teacher, and artist--founded Naropa University in Boulder, Colorado, the first Buddhist-inspired university in North America; the Shambhala Training program; and an international association of meditation centers known as Shambhala International. He is the author of numerous books, including Shambhala: Sacred Path of the Warrior, Cutting Through Spiritual Materialism, and The Myth of Freedom.

Carolyn Rose Gimian, has been editing the works of Chögyam Trungpa for more than thirty-five years. Following his death, she became the founding director of the Shambhala Archives, the archival repository for Chögyam Trungpa’s work in Halifax, Nova Scotia.