A Garland of Views: A Guide to View, Meditation, and Result in the Nine Vehicles (Hardcover) 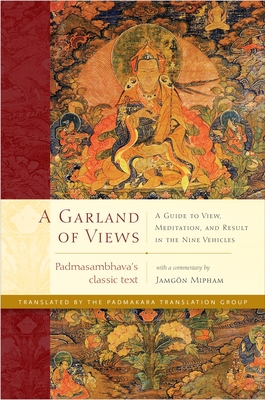 A Garland of Views: A Guide to View, Meditation, and Result in the Nine Vehicles (Hardcover)

By Padmasambhava, Jamgon Mipham, The Padmakara Translation Group (Translated by)

A concise commentary by the eighth-century Indian Buddhist master Padmasambhava on a chapter from the Guhyagarbha Tantra, which gives an overview of the different Buddhist and non-Buddhist philosophical views, including the Great Perfection (Dzogchen), with an explicative commentary by the nineteenth-century scholar Jamgön Mipham (1846-1912). Padmasambhava's text is a core text of the Nyingma tradition because it provides the basis for the system of nine vehicles (three sutra vehicles and six tantra vehicles) that subsequently became the accepted way of classifying the different Buddhist paths in the Nyingma tradition. Mipham's commentary is the one most commonly used to explain Padmasambhava's teaching. Mipham is well known for his prolific, lucid, and original writings on many subjects, including science, medicine, and philosophy, in addition to Tibetan Buddhist practice and theory.
PADMASAMBHAVA (eighth century), the Indian meditation master, is the founder of the Nyingma tradition, the oldest Buddhist tradition in Tibet. In addition to introducing the practices of tantric Buddhism to Tibet, he also completed the building of Samye, the first Buddhist monastery in Tibet.

JAMGÖN MIPHAM (1846-1912) displayed a universal genius as he wrote on all aspects of Buddhist theory and practice, as well as on the traditional sciences. He is one of the most influential figures to come out of the Tibetan tradition in recent centuries.

The PADMAKARA TRANSLATION GROUP, based in France, has a distinguished reputation for all its translations of Tibetan texts and teachings. Its work has been published in several languages and is renowned for its clear and accurate literary style.