Gypsy Gossip and Other Advice (Paperback) 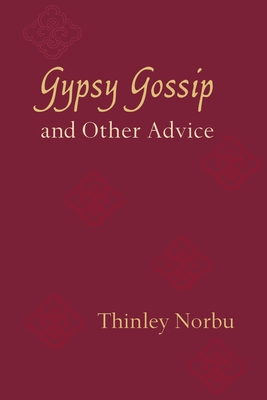 Gypsy Gossip and Other Advice (Paperback)


Email or call for price
Thinley Norbu addresses questions of interest to Western and Eastern students of Tibetan Buddhism, ranging from matters of everyday practice to esoteric philosophy.

Young practitioners of Tibetan Buddhism from Asian and Western cultures have similar questions and concerns, such as the conflicts between traditional values and the influence of modern materialism. In four thoughtful commentaries (described below), Thinley Norbu addresses contrasting cultural perspectives on topics ranging from everyday practice to esoteric Buddhist philosophy.

Gypsy Gossip: How should Westerners understand the rituals of Tibetan Buddhism, the teachings of karma and rebirth, monastic discipline, devotion to the guru, and the importance of keeping vows? Do Vajrayana practitioners need a consort? What is the Buddhist stand on male supremacy? These are just a few of the wide-ranging questions of Western students that are answered here by Kyabje Thinley Norbu Rinpoche in an atmosphere of spiritual friendship.

Buddhism in the West: In this never-before-published interview conducted by Melvin McLeod, editor of Shambhala Sun and Buddhadharma magazines, Rinpoche gives an extensive commentary on how cultural differences have affected the adoption of Tibetan Buddhism in the West. For example, Western children are raised to develop a strong sense of selfhood instead of humility, to be preoccupied with materialistic ideas about what is apparent to the five senses, and to embrace eternalist religion. Because of misapplied ideals of egalitarianism and individual freedom, many Western Buddhists are skeptical of traditional doctrines like karma and rebirth, devotion to the guru, and the importance of lineage. Rinpoche explains that Buddhism can flourish in the West through a greater development of faith and belief.

A Message for Young Bhutanese: Rinpoche had a close personal connection with the kingdom of Bhutan. In this message he urges young Buddhists to preserve their spiritual heritage and carry its blessings onward amid the modern influences of materialism. He warns against introducing foreign nihilistic beliefs into Bhutan and creating sectarian conflicts between its indigenous lineages. These words of advice were written for an organization called the Young Bhutanese Buddhist Association.

An Introduction to Dharma Dance Offerings: The Dharma dances of Tibet, which manifest the enlightened activities of peaceful and wrathful deities, are contrasted with ordinary dancing that expresses the passions of material reality and lacks the positive influence of wisdom. Thinley Norbu Rinpoche was himself an accomplished practitioner and teacher of sacred dance. This commentary was written in connection with several teaching films directed by Rinpoche, in which Dharma dances are performed by some of his young students.
THINLEY NORBU (1931-2011) was a prominent master of the Nyingma lineage of Tibetan Buddhism, revered as an emanation of Longchenpa, a great scholar-saint of the fourteenth century. Among Kyabje Thinley Norbu's numerous books are A Cascading Waterfall of Nectar, The Sole Panacea, and A Brief Fantasy History of a Himalayan.