Welcoming Flowers from across the Cleansed Threshold of Hope: An Answer to Pope John Paul II's Criticism of Buddhism (Paperback) 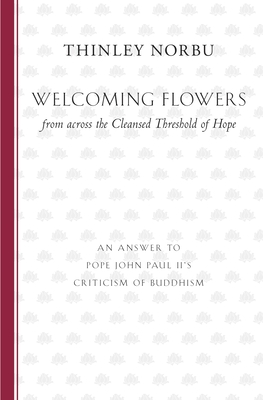 Welcoming Flowers from across the Cleansed Threshold of Hope: An Answer to Pope John Paul II's Criticism of Buddhism (Paperback)


Usually Arrives to Store in 1-5 Days
Welcoming Flowers is a pointed critique of the Buddhism chapter of Pope John Paul II’s 1994 best seller, Crossing the Threshold of Hope, written by the highly respected Buddhist teacher Thinley Norbu. In responding to the false charges of Buddhists’ indifference to the world and rejection of reality, Norbu clarifies the Buddhist doctrines of detachment and enlightenment. In addition, he covers the topics of good and evil, human nature, karma, cosmology, and dualistic mind, bringing them into conversation with the Christian perspective as presented by the Pope. Norbu’s approach is not to shoot back arrows in attack of Catholicism but to spread “welcoming flowers”—that is, to present the exalted teachings of the Buddha in all their loveliness and truth. In this sense, the book serves as a helpful introduction to the Buddhist worldview.
THINLEY NORBU RINPOCHE (1931-2011) was a preeminent teacher in the Nyingma school of Tibetan Buddhism. The eldest son of His Holiness Düdjom Rinpoche, he was a primary holder of the Düdjom Tersar lineage and was considered to be an emanation of Longchenpa, the great fourteenth-century Nyingma master.  He is the author of several books, including Magic Dance and White Sail.