The Path of Individual Liberation: The Profound Treasury of the Ocean of Dharma, Volume One (Paperback) 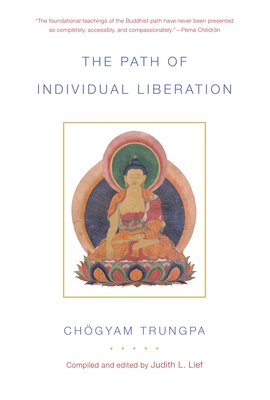 The Path of Individual Liberation: The Profound Treasury of the Ocean of Dharma, Volume One (Paperback)


Email or call for price
The foundational teachings of Buddhism—presented here in volume one of Chögyam Trungpa's magnum opus, which offers a systematic overview of the entire path of Tibetan Buddhism

This three-volume collection presents in lively, relevant language the comprehensive teachings of the Tibetan Buddhist path of the hinayana, mahayana, and vajrayana. Considered Chögyam Trungpa’s masterpiece, The Profound Treasury of the Ocean of Dharma will resonate with new and senior students of Buddhism.

Chögyam Trungpa begins his study by presenting the teachings of the hinayana. The hinayana introduces core Buddhist teachings on the nature of mind, the practice of meditation, the reality of suffering, and the possibility of liberation. It examines the nature of suffering, impermanence, and egolessness, with an emphasis on personal development through meditative discipline and study. The formal entry into the hinayana and the Buddhist path altogether is the refuge vow, in which a student goes for refuge to the Buddha, or the teacher; the dharma, or the teachings; and the sangha, or the community. The hinayana path is based on training in mindfulness and awareness, cultivating virtue, and cutting grasping.

Topics covered in detail in this volume include the four noble truths, karma, the four foundations of mindfulness, meditation practice, the refuge vows, the three jewels, the five skandhas, the five precepts, twofold egolessness, and more.
Chögyam Trungpa (1940–1987)—meditation master, teacher, and artist—founded Naropa University in Boulder, Colorado, the first Buddhist-inspired university in North America; the Shambhala Training program; and an international association of meditation centers known as Shambhala International. He is the author of numerous books including Shambhala: The Sacred Path of the Warrior, Cutting Through Spiritual Materialism, and The Myth of Freedom.

Judith L. Lief was a close student of Chögyam Trungpa, who authorized her as a teacher in the Buddhist and Shambhala traditions. She has served as one of his primary editors for over twenty-five years.
"The compassionate heart of my teacher, the Vidyadhara, Chögyam Trungpa Rinpoche, shines through in this, his articulation of the entire Buddhist path. He never lost sight of the fact that every aspect of the teaching is about nothing else than the freedom of awakening—and his great gift is that he never lets any of us lose sight of that either."—Pema Chödrön

"One of the most remarkable and brilliant teachers of modern times.”—Jack Kornfield

"Chögyam Trungpa Rinpoche had a particular genius in presenting the Dharma to Western audiences. . . . These volumes display the far-reaching goodness that can be created in the world when compassion and devotion come together.”—H.H. the Karmapa, Ogyen Trinley Dorje

"With the publication of The Profound Treasury of the Ocean of Dharma, these seminary transcripts have taken birth as three user-friendly volumes, beautifully arranged and elegantly edited without losing the author's intention or voice.  The volumes offer a glimpse of the heart teachings of the Vidyadhara, given to his students over several years with his uniquely provocative and meticulous style, enhanced by his knowledge of Western epistomology and psychology."—Dzogchen Ponlop Rinpoche, Buddhadharma