The Noodle Maker of Kalimpong: The Untold Story of My Struggle for Tibet (Hardcover) 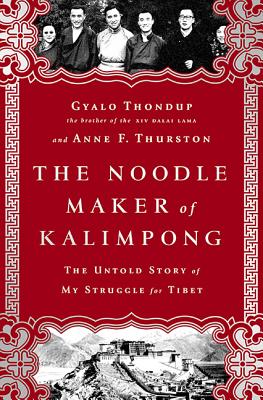 The Noodle Maker of Kalimpong: The Untold Story of My Struggle for Tibet (Hardcover)


Email or call for price
Shortly before midnight on March 17, 1959, the Dalai Lama, without his glasses and dressed as an ordinary Tibetan solider, slipped out of his summer residence with only four aides at his side. At that moment, he became the symbolic head of the Tibetan government in exile, and Gyalo Thondup, the only one of the Dalai Lama's brothers not to don the robes of a Buddhist monk, became the fulcrum for the independence movement.

The Noodle Maker of Kalimpong tells the extraordinary story of the Dalai Lama's family, the exile of the spiritual leader of Tibetan Buddhism from Tibet, and the enduring political crisis that has seen remote and bleakly beautiful Tibet all but disappear as an independent nation-state.

For the last sixty years, Gyalo Thondup has been at the at the heart of the epic struggle to protect and advance Tibet in the face of unreliable allies, overwhelming odds, and devious rivals, playing an utterly determined and unique role in a Cold War high-altitude superpower rivalry. Here, for the first time, he reveals how he found himself whisked between Chiang Kai-shek, Zhou Enlai, Jawaharlal Nehru, and the CIA, as he tried to secure, on behalf of his brother, the future of Tibet.
Gyalo Thondup, the older brother of the Dalai Lama, lives on a hilltop compound in Kalimpong, India, that also houses the noodle factory he set up with his late wife, Diki Dolkar (Zhu Dan).

Anne F. Thurston is a China specialist and senior research professor at the Johns Hopkins University's School of Advanced International Studies. She was the coauthor for the international bestseller, The Private Life of Chairman Mao, and is the author of Enemies of the People and A Chinese Odyssey. She lives in Alexandria, Virginia.
"...A fascinating and important book...[the book provides] extraordinary insight into Tibet's struggle against China to regain its independence...A crisp and magnetic story."—The Wall Street Journal

“A vital narrative of Tibetans' ongoing effort for independence, and Thondup's bravery is commendable.”—Publishers Weekly

"Anyone seeking a detailed version of the history, life, and struggles of Tibet, the Dalai Lama, and his family will find it here, recounted in an authorial voice that is both conversationally personal and educational."—Booklist