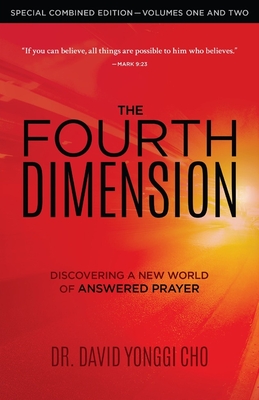 In this new combined version of The Fourth Dimension--Volumes One and Two, Dr. David (Paul) Yonggi Cho's comprehensive spiritual philosophy on the power of dynamic faith is brought together in one place for completeness and ease of reference.

A Senior Pastor Emeritus of Yoido Full Gospel Church in Seoul, Korea, Dr. Cho grounds his belief in his experiences following his conversion to Christianity as a young man and while suffering from tuberculosis. By developing the idea of the spiritual being as the fourth dimension, he ultimately demonstrates how this can, through faith and prayer, influence and effect change in the physical being leading to personal growth and renewal. In these pages you'll discover:

Dr. David Yonggi Cho, is the pastor of the Yoido Full Gospel Central Church in Seoul, Korea. His church has become one of the largest worshiping bodies in the world. The congregation numbers over 730,000 members involved in more than 25,000 home cell groups. Dr. Cho has authored such best-sellers as Successful Home Cell Groups, Unleashing the Power of Faith, The Fourth Dimension Vol. 2, Solving Life's Problems, Suffering... Why Me?, A Leap of Faith, and 4th Dimensional Living in a 3 Dimensional World.